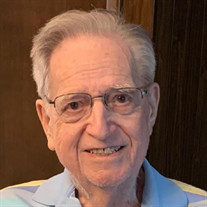 ***Update*** Due to family exposure to Covid, the visitation and Memorial Service will be postponed until Saturday, January 16, 2021. Franklin Delano Fanning, 87, of Bowling Green passed away peacefully at his home on December 26, 2020. Visitation for Frank will be held from 10:00 a.m. to 11:00 a.m. on Saturday, January 2, 2021 at Bibb-Veach Funeral Home in Bowling Green. A Memorial Service will be held at 11:00 a.m. at the funeral home with Pastor Bruce Moeller officiating. Masks will be required. Frank was born March 4, 1933, in Perry, Missouri to Floid Ely and Lettie Mae Jackson Fanning. He was united in marriage to Carol Louise Barnes of Vandalia in 1956. To this union two children, Del and Joni, were born. Frank graduated from Perry High School in 1951 and was employed by White Chevrolet in Perry for a short time. After spending a couple of years working at the Ely Walker Garment Factory in Vandalia, Frank served in the United States Army from April of 1953 until January of 1955. He was honorably discharged as a Corporal. Frank moved to Quincy, Illinois, where he attended Gem City Business College for two years. He was then employed with Hunter Meat Packing Company. After his marriage to Carol, the couple moved to Louisiana, Missouri, for two years and in 1960 moved to Bowling Green. He compiled an impressive record of achievement that includes working for Metropolitan Life Insurance Company for twenty-four years, owning The Steak House in Bowling Green, working for Shaon Motors as parts manager in Bowling Green, and working for Community State Bank as a courier between Bowling Green and Troy post retirement years. Frank was very active in the community, including assisting in the establishment of the Bowling Green Jaycees charter, past president of Bowling Green Rotary, past president of Bowling Green Lions Club, past Finance Chairman and Elder of First Christian Church, member of Bowling Green City Council, member of VFW Post #5553, Bowling Green City Alderman, and member of the Pike County Fair Board. Frank enjoyed serving his community and doing things for other people. Frank is survived by his wife, Carol; son, Del Fanning (Teresa) of O’Fallon, Illinois; daughter, Joni Nix (John) of Omaha, Nebraska; sister, Edith Irwin of Springfield, Illinois; granddaughters Melissa Fanning (Jason Garvey) of O’Fallon, Illinois, Courtney Marquiss (Chris) of Omaha, Nebraska, and Emma Nix of Omaha, Nebraska; great-grandchildren Lily Garvey, Colton Marquiss, and Caleb Marquiss; and several nieces and nephews. He was preceded in death by his parents; brother Tom; and sisters Georgie Belshe, Mary Cox, and Francis Fanning, who died as a toddler. Frank collected die cast antique cars. He was always sure to keep his vehicles clean and in pristine condition. He was a huge fan of the St. Louis Cardinals and loved traveling across the country with Carol and friends or family. They particularly enjoyed traveling to Arizona and Texas during the winter. He enjoyed hunting and fishing with his son when they were younger and cheering on his daughter while she played softball and volleyball in high school. Frank liked to cook and grill; he was known for grilling the best hamburgers and pork steaks. He enjoyed spending time with his children and grandchildren whenever he could. Memorials may be made to the First Christian Church or VFW Post #5553. Online condolences may be made at www.bibbveach.com

***Update*** Due to family exposure to Covid, the visitation and Memorial Service will be postponed until Saturday, January 16, 2021. Franklin Delano Fanning, 87, of Bowling Green passed away peacefully at his home on December 26, 2020. Visitation... View Obituary & Service Information

The family of Franklin Delano Fanning created this Life Tributes page to make it easy to share your memories.

***Update*** Due to family exposure to Covid, the visitation...

Send flowers to the Fanning family.