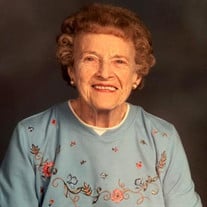 Geneva May Kientzy Bowles, 101, passed away on September 11, 2018, at The Maples Health and Rehabilitation in Springfield, Missouri. Geneva was born in Apex, Missouri, on May 31, 1917, to the late George M. and Clara C. Miller Kientzy. She lived on the family farm in Silex, Missouri until her marriage to William Bernard Bowles on May 5, 1936, when they moved to St. Louis, Missouri. She was a loving and devoted wife and mother to their four children. She enjoyed sewing, quilting, gardening, bowling, and volunteering at her church and children's schools. After her husband retired from Moloney Electric Company in 1970 they moved back to Silex, Missouri, where she belonged to the St. Alphonsus quilting club and the local Scopic club and volunteered at St. Alphonsus School in Millwood, Missouri. Known for her homestyle cooking, Geneva’s kitchen was a gathering place for family and friends. Geneva was preceded in death by her husband of 44 years William Bowles; her infant daughter Mary Janet Bowles; her parents George and Clara Kientzy; her brothers Brother Pius Kientzy O.S.B., DeSales Kientzy, and Dick Kientzy; and sisters Angela Kientzy Phelan and Virgina Kientzy Gieselman; and daughter-in-law Sheila Byrnes Bowles. Surviving Geneva are her four children, William Ronald Bowles (Karen), Charles Kenneth Bowles, Marilyn Bowles Zorn (David), and Jane Bowles Johnson (Chet); sister Marie Kientzy Kunza and sister-in-law Viola Burkemper Kientzy; 15 grandchildren, 22 great-grandchildren, and numerous nieces and nephews. Viewing will be on September 29, 2018, from 9:00 am. to 10:00 am. before the Funeral Mass at St. Alphonsus Catholic Church, 29 St. Alphonsus Road, Silex, Missouri 63377. Burial will be at St. Alphonsus Cemetery following Mass. In lieu of flowers memorial donations may be made to St. Alphonsus School, 25 St. Alphonsus Road, Silex, Missouri 63377 or your charity of choice.

Geneva May Kientzy Bowles, 101, passed away on September 11, 2018, at The Maples Health and Rehabilitation in Springfield, Missouri. Geneva was born in Apex, Missouri, on May 31, 1917, to the late George M. and Clara C. Miller Kientzy. She... View Obituary & Service Information

The family of Geneva May Bowles created this Life Tributes page to make it easy to share your memories.

Send flowers to the Bowles family.