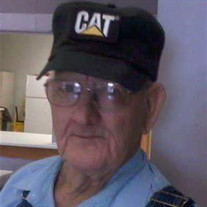 George Edward Kelch, age 88 of Vandalia, formerly of Curryville, passed away Saturday, May 27, 2017 at his residence. Funeral services will be held at 10:00 am on Wednesday, May 31, 2017 at the Bibb-Veach Funeral Home in Bowling Green with Glenn Hickerson officiating. Burial will be in the Mt. Air Cemetery. Visitation will be held from 4:00 pm until 6:00 pm on Tuesday at the funeral home. George was born September 17, 1928 in Louisville, the son of Barney Samuel and Nancy Casandrew Cox Kelch, Sr. He married Mary Pauline Hickerson January 2, 1954. She preceded him in death December 3, 2015. Survivors include sister Lillian Schuckenbrock of Bowling Green, many nieces and nephews. He was preceded in death by his wife, parents, infant daughter Mary Catherine Kelch, brother Barney Samuel Kelch Jr., sisters Catherine Pallardy, Mildred Brewer Moran and Margaret Beurskens. George grew up in Louisville. He started farming with his father Barney S. Kelch Sr. as a teenager and later moved to the family farm south of Curryville until he retired in 1999. George moved to Vandalia in 2007. He enjoyed hunting and fishing and going to fish fry’s with family and friends. George was always ready to help his neighbors, especially if they needed help getting their farm equipment up and running. Serving as pallbearers will be Merald Schuckenbrock, Donnie Moran, Marvin Yager, Caleb Gregory, Zeth Gregory and Josh Gregory. Serving as honorary pallbearers will be Benjamin Gregory, George Riley and Ronnie McBride. Memorials may be made to the Mt. Air Cemetery.

George Edward Kelch, age 88 of Vandalia, formerly of Curryville, passed away Saturday, May 27, 2017 at his residence. Funeral services will be held at 10:00 am on Wednesday, May 31, 2017 at the Bibb-Veach Funeral Home in Bowling Green with... View Obituary & Service Information

The family of George Edward Kelch created this Life Tributes page to make it easy to share your memories.

Send flowers to the Kelch family.