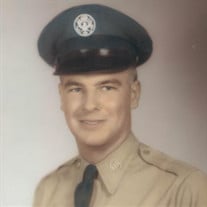 George Herman Tophinke, age 85 of Bowling Green, passed away Monday June 4th, at his residence. A Mass of Christian Burial will be held at 10:am on Thursday June 7, 2018 at St. Clement Catholic church in Bowling Green, with Rev. Jason T. Doke,... View Obituary & Service Information

The family of George Herman Tophinke created this Life Tributes page to make it easy to share your memories.

Send flowers to the Tophinke family.