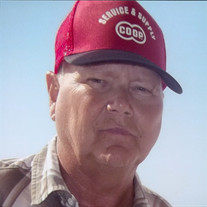 George Allen Way, age 75 of New Hartford Missouri, passed away at his home on Friday, September, 28th 2018. He was surrounded by his loving family. A funeral mass will be held 10:00 a.m. Monday, October 1, 2018 at the St. Clement Catholic Church in St. Clement with Father Jason T. Doke, S.T.L. officiating. Burial will be in the St. Clement Cemetery. Visitation will be held 5:00 - 8:00 p.m. Sunday, September 30, 2018 at the Bibb-Veach Funeral Home in Bowling Green. George was born May 21, 1943 in Bellows Falls VT to Roland Percy Way and Phyllis Elizabeth Corliss Way. George moved from Vermont to Maine at a young age and eventually onto Kingsville, MD. While there he attended elementary school and worked with his father. While working with his father he taught himself to repair lawn mowers earning enough at a young age enough money to buy his first bulldozer. During his early teens he moved with his family to Sacramento, CA. In California, he developed a love of motorcycles especially off road riding. In the early sixties George moved with his family back to Maine, where he and his father developed a successful business of refurbishing and selling industrial and logging equipment. George also developed a passion for snowmobiling. In 1974 George met Nancy Gail Dean of Bowling Green, MO; who was living and working in Maine. On October 25th, 1975 the two were united in loving marriage at St. Clement Cathlic Church. George and Nancy left Maine in 1978 for southwest Missouri and eventually returned to Bowling Green opening Way's Equipment and later 3-G's Flea Market with the help of his daughter Gail and wife. In later years George enjoyed attending Old Thresher Shows and working in his shop. George is survived by his wife Nancy, daughter Gail Way and husband Benjamin Walker of New Hartford, granddaughter Mellany Way-Ziebol; sisters Marie Perry of San Jose, CA and Shirley Wiley and husband Ray of Carmichael, CA; nieces Alyson Willey of Sacramento, CA, Sharon Wiley and husband Stephen Morairty of Scotts Valley, CA; great nieces Annastasia, Isabella and Alexandria. George was preceded in death by his parents and sister, JoAnn Williams. Serving as pallbearers will be Eddie Dean, Harold Sanchez, Benjamin Walker, James Walker, Daniel Bunten and Philip Ziebol. Honorary pallbearers will be Jerry Litvinoff and Ray Willey. Memorials can be made in his honor to the National Kidney Foundation or M.S. Foundation.

George Allen Way, age 75 of New Hartford Missouri, passed away at his home on Friday, September, 28th 2018. He was surrounded by his loving family. A funeral mass will be held 10:00 a.m. Monday, October 1, 2018 at the St. Clement Catholic Church... View Obituary & Service Information

The family of George Allen Way created this Life Tributes page to make it easy to share your memories.

Send flowers to the Way family.