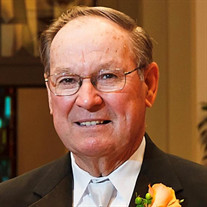 Gerald Oscar Merz, 80, of Bowling Green, passed away Tuesday, March 15, 2022 surrounded by his loving wife and children at DePaul Hospital in St. Louis. A Mass of Christian Burial will be held Monday, March 21, 2022 at 10:00 a.m. at St. Clement Catholic Church with Fr. Dan Merz and Fr. Henry Ussher officiating. Burial will be at St. Clement Cemetery. Visitation will be held Sunday, March 20, 2022 at Bibb-Veach Funeral Homes & Crematory in Bowling Green, MO from 3:00 p.m. to 7:00 p.m. Gerald was born May 8, 1941 in Dardenne, Missouri to William A. and Alvina E. (Hemmer) Merz. He and Sandra (Sandy) Lea Muldoon began dating in high school, and married on October 20, 1962 at Immaculate Conception Church in Dardenne. Sandy survives. Also surviving are children: Christopher Merz (Jill) of Wentzville, Mary Ann Merz (Michael Ruland) of St. Louis, Susan Niemeyer (Todd) of O’Fallon, Fr. Daniel Merz of Columbia, and Michael Merz (Colleen) of St. Peters; grandchildren: Evan Merz (fiancée Kacey Ludwig), Austin Merz (Emily), Chloe Buckman-Ferrara (Michael), Maggie Niemeyer, Zachary Niemeyer, John Ruland, and David Ruland; great-granddaughter, Lilah Niemeyer; sister, Barbara King of Perryville; sister-in-law, Donna Merz of Bowling Green; and many nieces, nephews, and extended family. Gerald was preceded in death by his parents; brother, Arthur Merz, step-mother, Rose Merz, and brother-in-law, Joseph King. Gerald grew up in Dardenne, Missouri and graduated from Assumption High School in 1959. He loved baseball and pitched for both his high school team and the Dardenne Hard Road League. After he and Sandy married, Gerald worked on his family’s dairy farm. In December of 1963 the family moved to rural Bowling Green and purchased a farm with Gerald’s brother and father starting William A. Merz and Sons farm. In the early 1970s, Gerald and his brother, Arthur, began their cow-calf operation. Always seeking to improve the quality of the cattle over the last 50 years, Gerald recently realized the culmination of his efforts in the sale of the herd last month. In his younger years, Gerald and his brother raised beagles. Renewing that interest, he and Sandy recently witnessed the birth of nine puppies. He loved family gatherings and being with his grandchildren on the family farm. Gerald and Sandy welcomed many family and friends from near and far into their home over the years. He enjoyed the work and the social aspects of rural farm life, especially his dear neighbors. He was well-known in the community, and well-liked and respected by all who had the pleasure of knowing him. He was committed to helping at the St. Clement picnic and enjoyed many socials and dances at the St. Clement Knights of Columbus Hall. Gerald served his country in the National Guard, and was a member of the Bowling Green Rural Fire Board for many years. He was active in St. Clement School and Parish, serving on the School Board, Parish Council, and Finance Committee. He was also a 3rd Degree member of the Knights of Columbus. Pallbearers will be Michael Merz, Evan Merz, Austin Merz, Zachary Niemeyer, John Ruland, and David Ruland. Honorary pallbearers will be Paul Merz, Mike Schumacher, Tim Muldoon, Gary Gerber, and Mike Bolte. Memorials may be made to St. Clement School or Options For Women.

Gerald Oscar Merz, 80, of Bowling Green, passed away Tuesday, March 15, 2022 surrounded by his loving wife and children at DePaul Hospital in St. Louis. A Mass of Christian Burial will be held Monday, March 21, 2022 at 10:00 a.m. at St. Clement... View Obituary & Service Information

The family of Gerald Oscar Merz created this Life Tributes page to make it easy to share your memories.

Send flowers to the Merz family.