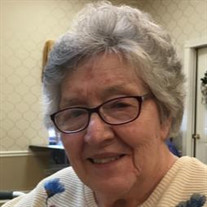 Gertrude (Trudy) Catherine Holman, 85, of Silex, passed away Sunday, June 21, 2020 at Chestnut Terrace in St. Peters, Missouri. Funeral services for Trudy will be held Friday, June 26 at 10:00 a.m. at St. Alphonsus Catholic Church in Millwood, Missouri with Father Tichacek officiating. Visitation will be from 5:00 – 7:00 p.m. Thursday, June 25, at Bibb-Veach in Silex. The family ask that social distancing be observed, and that masks be worn to the visitation and the funeral. Trudy was born June 28, 1934 to George Joseph Boden Sr. and Gertrude Catherine Beyert Boden in Robertson, Missouri. She was joined in marriage to Monroe A. Holman. He preceded her in death. Trudy was born in St. Louis County, and lived in Bridgeton in the 1960s. In the 1970s, Trudy moved to Silex where she lived until going to assisted living. Trudy taught Public School Religion. She was also a secretary at Pattonville High School and served as the Deputy County Clerk in Troy, Missouri. She loved to travel with her husband, and they had been to almost every state. She also enjoyed camping, quilting, canning, and gardening. She loved spending time with family and was known as quite the prankster. She loved looking through cook books and trying new recipes. Trudy cared for her sister, Anita, until the time of her passing. Trudy is survived by step-daughters Sandra Jugan and Marilyn Waite; step-grandchildren Michelle Wahl, Jeff Jugan, Michael Jugan, Patty Holman-Yoss, Douglas Holman, Christy Holman Long, Rob Waite, and Brian Waite; several step-great-grandchildren, a niece, Michelle Kientzy, and a nephew Richard J. Boden. She was preceded in death by her husband, step-son Max Holman, brother George J. Boden, Jr., and sister Anita Naumann. Memorials may be made to the Alzheimer’s Association.

The family of Gertrude "Trudy" Holman created this Life Tributes page to make it easy to share your memories.

Send flowers to the Holman family.