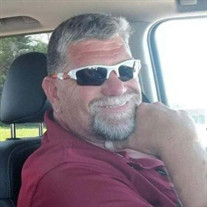 What can I say about Glenn Doggett? He was the BEST. He was a big guy with a big personality and a big heart. If you ever met him, you undoubtedly have some fun stories to tell! But first, I need to tell his story. Forrest Glenn Doggett graced the world with his presence on June 13, 1969. He joined his parents, Billie and Helen, plus four sisters; Suzy, Tammy, Debbie, and Pam. Texas was never the same again! He spent his childhood in Texas. One day in 1985, Jim McMillen asked him to move up to Missouri to work for him, and I thank God every day that he said yes. Pam and Jerry Calvin opened their home to him, and he gained a new family that included Jerri Jean, Bobby, AJ, and Ronny. He lived life to the fullest until 2009 when he took on a new purpose. Glenn and Toni were married and welcome Bradley and Bristol into their lives then. It was that year that he became the best father and husband anyone could dream of. If the kids or I had any want or need- done! There was no task too large to show his love to his friends and family. He worked so hard to build us the perfect life, and he succeeded beyond measure. Glenn Doggett was a man that you couldn’t forget even if you tried. He could work on just about anything, he could talk NASCAR or trucking with you all day, he loved with his whole heart, and he was always the life of the party. Many people have memories with Glenn, so I will leave those stories for them to share. Just know, he was the best human. Unfortunately, not everyone got to celebrate his last moments on Earth with him. His birth parents, bonus parents, sister Debbie, brother Bobby, and way too many friends left sooner. As Glenn’s Earthly story comes to an end, know that his legacy does not. His wonderful children and beautiful memories will remind us every day that we got to experience a little piece of Heaven on Earth by knowing Glenn Doggett. Glenn’s visitation is 3-8 pm on Thursday, October 7, at Bibb-Veach Funeral Home in Bowling Green. His funeral is at 10 am on Friday, October 8, in the same location. Glenn will be laid to rest by his pallbearers, AJ Calvin, Ronny Calvin, Tim Compton, Ryan “Chubs” Flynn, Chad McAfee, Rob Jennings, Kent Camden, and Darrel “Big Dog” Madden, at the Fairview Cemetery in Frankford. A meal and celebration of Glenn’s life will follow immediately at the Outer Road Event Center in Frankford. Everyone is welcome to attend Glenn’s Farewell Party. In lieu of flowers, donations may be made to The Doggett Children’s Educational Fund at HNB Bank.

What can I say about Glenn Doggett? He was the BEST. He was a big guy with a big personality and a big heart. If you ever met him, you undoubtedly have some fun stories to tell! But first, I need to tell his story. Forrest Glenn Doggett graced... View Obituary & Service Information

The family of Glenn Doggett created this Life Tributes page to make it easy to share your memories.

What can I say about Glenn Doggett? He was the BEST. He was a...

Send flowers to the Doggett family.