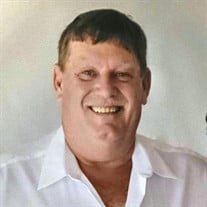 Gregory Jay Tipton, age 60, of Curryville, MO, passed away Saturday, December 19, 2020 at the Hannibal Regional Hospital in Hannibal, MO surrounded by his family. A Life Celebration service will be held at 12:00 pm Saturday, December 26, 2020 at the VFW Post #5553 in Bowling Green, MO with Pastor Mike Dallas officiating. Facemasks are required. Greg was born June, 28, 1960 in Kirkwood, MO, the son of Bill and Geri Fultcher Tipton. He attended and graduate from Bowling Green High School in 1979 and joined Painter’s District Council #2 Local 1156 of that same year. He married Pam Kottwitz August 23, 1980, and to this union two children were born. Survivors include wife Pam Tipton of Curryville; son Gregory Jay Tipton II (Mindy) of Wentzville, MO; Brandi Tipton (Randy Kesel) of St. Charles, MO; grandchildren Jacob Tipton, Jaelyn Smith and Brody Tipton; brothers William “Buzz” Tipton (Aeron) and Anthony Tipton (Lana); sister Kelly Caligiuri (John). Other survivors include nephews Chris Tiptopn (Jordyn),Bobby Tipton, Luke Tipton, and Cole Tipton; nieces Randi Guilmett (Bobby), Sheila Felman, Tina Staten (Jasen), Jenny George (Mark), Christy Peasel (Greg), Shelly Tipton, and Danielle Foreman (Tyler); multiple great nieces and nephews; sister-in-law Lori Kottwitz, and father-in-law Everett Lovell. He was preceded in death by his parents, grandmothers Irma Griffin and Lois Ryan; granddaughter Abigale Sue Tipton; sister Cari Shy; mother-in-law Carley Lovell; nephew Rusty Tipton, and great nephew Boden Feldmann. Greg was known as a hard-working individual who loved his family, sports, music and being outdoors. After being a painter, he worked for North Eastern Correctional Center and True Manufacturing until he retired in July of 2020. Greg enjoyed sports, serving as a volunteer coach for Khoury League, American Legion Baseball, and any teams his children were involved with. When his daughter signed on to play DIV-I college basketball with the University of Mississippi, he could always be seen sporting an Ole’ Miss shirt. Outside of his children’s sports activities, he was a huge St. Louis Cardinals fan and never missed listen to or watching a game. Greg enjoyed the outdoors, gambling, and music. Greg looked forward to being outdoors and having the chance to deer hunt and fish. He was a huge Creedence Clearwater Revival and ZZ Top fan. He took his children to their first concert to see Hank Williams Jr. when they were young and his love for music has passed on to them. Above all, Greg loved and supported his family in whatever they were involved in. Whether it was his children or his grandchildren, he was always there either as a coach or in the stands cheering them on. He will be greatly missed by all that knew him. Memorials may be made to the Cardinals Glennon Children’s Hospital, St. Louis Children’s Hospital, or The Refuge Church.

The family of Gregory Jay Tipton created this Life Tributes page to make it easy to share your memories.

Send flowers to the Tipton family.