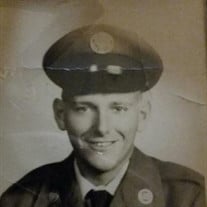 Harry Edward Patton, 83, of Silex, Missouri passed away on January 1, 2021 at the Mercy Lincoln Hospital in Troy, Missouri. A memorial service will be held at a later date. Cremation arrangements are under the direction of Bibb-Veach Funeral Home in Bowling Green, Missouri. Harry was born May 2, 1937 in Corso, Missouri to Lawrence Elmore Patton and Ethel Marjorie (Graves) Patton. Harry grew up in Silex, Missouri. He attended and graduated from the Silex School system. He joined the United States Air Force, where he served as a Special Vehicle Maintenance Officer from July 26, 1955 thru July 25, 1959. He was honorably discharged and came home to meet and marry his wife, Shirley Mae Patton on June 4, 1960. She survives of the home. Other survivors include two sons, David Wayne Patton and wife Ana of Fredericksburg, Virginia, and Brian Keith Patton and significant other, Juanita McCall of Silex, Missouri; three grandchildren, Caroline, Adrianna, and Spencer; and one great-granddaughter, Marin. He thought the world of them and would brag to everyone on their accomplishments. He is also survived by a brother, Lindell Patton and wife Karen of Ellisville, Missouri; sister, Joyce Fischer and husband Bill of Foley, Missouri; brother, James Patton and wife Linda of Silex, Missouri; brother, Gary Patton and wife Carol of O’Fallon, Missouri; along with many nephews and nieces. Harry was preceded in death by his parents; brother, Roger Patton; sister, Diane Gullett; sister, Shirley Morris; and an infant son. Harry worked in different jobs after the service. He worked at the elevator in Silex. He and his family moved to Rolla, Missouri where he drove a truck for the Bow-Wow Dog Food Company for 3 years. He and his family came back to Silex to make their home and he worked at Watson Quarry as a mechanic. He later became the manager of Silex Lumber Company. He was later employed as the Lincoln R-2 School District in Elsberry, Missouri until his retirement. Harry was a member of Olney Baptist Church and also served as a Deacon. Harry was a person who had to be busy at something all the time. He was never late for an appointment, and always made sure to be to work on time. If there ever came a time when he would be late to work at the school, they told him to be sure to call so they knew nothing had happened to him. He loved to use his hands doing many projects. You never knew what it was going to be until he was finished. Harry and the family built the family home. Harry loved people and liked to talk. He was always there if someone needed help. The older ladies of the community knew they could call on Harry because he could fix anything. He loved to be outside doing things and as time slowed him down, he could be found helping inside the house, as well as mowing and caring for 4 acres. Harry was a member of Silex Lodge # 75 AF-AM. He served as a Past Master and Chaplain. He also worked several years as the fish fryer until he had to give it up. Memorial contributions may be made to Olney Baptist Church or to the Donor’s Choice.

Harry Edward Patton, 83, of Silex, Missouri passed away on January 1, 2021 at the Mercy Lincoln Hospital in Troy, Missouri. A memorial service will be held at a later date. Cremation arrangements are under the direction of Bibb-Veach Funeral... View Obituary & Service Information

The family of Harry Edward Patton created this Life Tributes page to make it easy to share your memories.

Harry Edward Patton, 83, of Silex, Missouri passed away on January...

Send flowers to the Patton family.