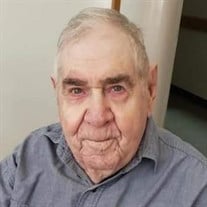 Henry Everly Clark, Jr., 95, of Bowling Green, passed away Wednesday, October 20, 2021 at Lynn’s Heritage House in Louisiana. Funeral services for Henry will be held Monday, October 25, 2021 at 11:00 a.m. at Antioch Presbyterian Church in Bowling Green with Richard Biggs officiating. Burial will be at the Antioch Cemetery. Visitation for Henry will be from 10:00 a.m. to 11:00 a.m. on Monday at the church. The family requests that masks be worn by those who attend. Henry was born on November 15, 1925 in Bowling Green, Missouri to Henry Everly Clark, Sr. and Ruth Lloyd Robinson. He was united in marriage to Lulu Lee Colbert on August 14, 1948 in Hannibal, Missouri. She preceded him in death in 2013. Henry is survived by daughters, Myrna Trower (Wilby) of Troy, Missouri, and Karen Cover (Joe) of Bowling Green; grandchildren: Teresa Reynolds (Corey), Bill Cover (Ginna), Jeff Trower (Kristy), and Roy Cover; great-grandchildren: Kyle Brewster, Kory Brewster, Tami Reynolds, Mealiea Cover, Bridgett Cover, and Brandt Cover; along with many nieces and nephews. Henry was preceded in death by his parents; his wife; sisters, Barbara Pennewell and Anna Gene Colbert; and a brother, Lloyd Clark, who died in infancy. Henry grew up in Pike County and lived here his entire life. He was a 1943 graduate of Bowling Green High School. He was drafted into the United States Army as an MP and a truck driver, and served from September 9, 1946 to April 16, 1947. He was a member of the Vintage Machinery Club and loved antique tractors and farm machinery. Henry loved going to farm auctions and showing his tractors in Elsberry at the Old Trasher’s event. He enjoyed spending time with his family and going to MeMe’s for coffee in the mornings. When his daughters were younger, Henry made sure they learned to play softball, and he was always a big Bowling Green Bobcat supporter. Henry was a member of the Antioch Presbyterian Church; as well as an Elder, a Deacon, and a Cemetery Board member. Henry was known as an honest and simple man. He will be greatly missed by all who were blessed to know him. Pallbearers will be Kyle Brewster, Kory Brewster, Joe Cover, Bill Cover, Jeff Trower, and Corey Reynolds. Honorary pallbearer will be Roy Cover. Memorials may be made to Antioch Cemetery or Antioch Presbyterian Church.

The family of Henry Everly Clark Jr. created this Life Tributes page to make it easy to share your memories.

Send flowers to the Clark family.