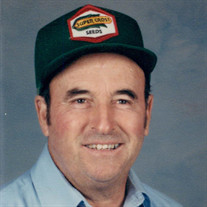 Herman Twellman 93 of Bowling Green, formerly of Silex, passed away Monday August 15, 2016 at the Moore Pike Nursing Home in Bowling Green. Funeral Mass will be held Thursday at 10:00 A.M. at the St. Alphonsus Catholic Church in Millwood with Fr. Charles Tichacek officiating. Burial will be in St. Alphonsus Cemetery with military rites performed by the Missouri Military Honors and VFW Post #5553. Visitation will be held Wednesday August 17, 2016 from 4 - 8 P.M. at the Millwood Knights of Columbus Hall. Herman was born on November 7, 1922 in Silex, the son of William Lawrence and Agnes Sullivan Twellman. He grew up in Silex and then served his country as a sergeant in the US Army during WWII. He married Marcella Behlmann on April 30, 1947 in St. Clement. She preceded him in death on December 29, 1990. He married Judy Thomas on December 28, 1995 in Las Vegas and she survives. Also surviving are sons Ralph(Beverly) of Columbia, Ron(Phyllis) of Eolia, Mike (Pat), Rick (Becky), George (Vicki) all of Silex, Jerry(Tina) of Troy, Mark (Cheryl) of Silex; four stepsons Brian (Caroline) of Raymore, Brad (Dawn) of Bowling Green, Brent (Kristen) of Sweet Springs, and Brock (Joey) of St. Peters; daughters Ruth (Ted) Heffner of Eolia, Mary (Gerald) Hrdina of Fayette, Judy (Kim) Ryan of Silex and Marlene (Steve) Likens of Overland Park, KS.; 32 Grandchildren and 52 Great Grandchildren. He was preceded in death by two brothers Harry Twellman, and William Lawrence Twellman in infancy; two sisters Bernice Haddock and Vivian Zanders; one granddaughter Brandi Twellman. Herman was a member of the St. Alphonsus Catholic Church and the Millwood Knights of Columbus Council #2009 where he served as the financial secretary for many years and helped get the Millwood Hall built. He was a member of the VFW in Troy, FSA/ASC, Farm Bureau and was an Honorary FFA member and 4-H Leader. Herman farmed all his life, but also drove a school bus for 23 years for the Silex R-1 School where he enjoyed the students and enjoyed driving them to many school events and activities. He also did custom baling for many years in Pike and Lincoln counties and did snow removal for the Missouri State Highway Department. He enjoyed brush hogging and mowing, but above all enjoyed spending time with his family. Pallbearers will be Nick Heffner, Andy, Brian, Dustin, Eric, Gabe and Jeffrey Twellman, Chad Hrdina, Chris Ryan and Tony Likens. Honorary pallbearers will be Greg and Ross Hrdina, Robby Ryan, Wade Twellman, Bryce and Brock Likens, Andrew and Keaton Niemeyer. Memorials may be made to the St. Alphonsus Catholic Church or St. Alphonsus Cemetery.

Herman Twellman 93 of Bowling Green, formerly of Silex, passed away Monday August 15, 2016 at the Moore Pike Nursing Home in Bowling Green. Funeral Mass will be held Thursday at 10:00 A.M. at the St. Alphonsus Catholic Church in Millwood with... View Obituary & Service Information

The family of Herman Twellman created this Life Tributes page to make it easy to share your memories.

Send flowers to the Twellman family.