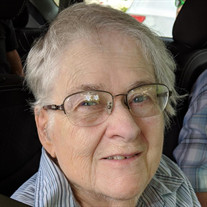 Ida Mae Fife, 79, of Laddonia passed away Wednesday, July 28, 2021 at her home. Cremation rites are under the direction of Bibb-Veach Funeral Homes and Crematory of Bowling Green. A Celebration of Life will be held at a later date. Ida was born in Elysian, Minnesota on January 30, 1942 to Howard Simons and Olive Clarke. She was united in marriage to John Fife on June 24, 1967 at the Nazarene Church in Mora, Minnesota, where they had met two years prior. He survives. Also surviving are children: Gay Lynn Fife of Laddonia, Jennifer Fife of Laddonia, Jay Fife (Sara) of Peculiar, Missouri, and Vivian Braxton (Donald) of Warr Acres, Oklahoma; grandchildren: Spencer and Henry Fife, and Inari, Elliot, Theoni, and Emmerik Braxton; brothers: Marvin Simons and Leonard Simons of Minnesota; sisters: Phebe Knudson and Carrie Ringler of Minnesota; half-sibling, Virginia Lench (Paul of Virginia; and many nieces and nephews. Ida was preceded in death by her parents; and half-siblings: Rhea Swoboda, Robert Swoboda, Wilma Taute, and Edward Swoboda. Ida grew up in Mora, Minnesota. She was a 1960 high school graduate, then moving on to earn her Bachelor’s degree in education at Bethany Nazarene College in Bethany, Oklahoma. She later earned her Master’s degree in Business Education at Michigan State University. Ida taught school while living in Michigan. Ida and John relocated to Colorado Springs, Colorado when John answered a calling from the Lord to attend Nazarene Bible College. Ida taught night classes at a Junior College. John later accepted a pastorship in Missouri. John and Ida became members of the Bowling Green Church of the Nazarene family. Ida worked as a part-time dispatcher for the Vandalia Police Department and later for the Missouri Department of Mental Health. In March of 1996, she went to work at the Department of Corrections women’s facility in Vandalia, retiring in 2010. Ida enjoyed watching her daughter play sports. She also enjoyed reading novels and watching The Game Show Network in her free time. She loved spending time with her grandchildren and traveling back to Minnesota to visit with friends and family.

Ida Mae Fife, 79, of Laddonia passed away Wednesday, July 28, 2021 at her home. Cremation rites are under the direction of Bibb-Veach Funeral Homes and Crematory of Bowling Green. A Celebration of Life will be held at a later date. Ida was... View Obituary & Service Information

The family of Ida Mae Fife created this Life Tributes page to make it easy to share your memories.

Send flowers to the Fife family.