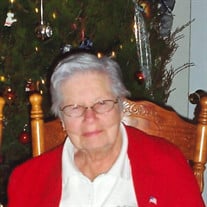 Ida Lou Riley Smith passed away Saturday, February 19, 2022 at Maple Grove Lodge in Louisiana, Missouri. Ida Lou was born at the family home in Buckner Hollow July 18, 1928, the youngest of Perry Riley and Anna Belle Johnson Riley. She joined five brothers; Hurley, Robert, Roscoe, Raymond, and Albert; and one sister, Esther Riley Eddington. Ida grew up in the Mt. Zion community, and attended Buckner Hollow and Norton schools, as well as Mt. Zion Church. As a young woman she worked at the glove factory in Louisiana, Missouri. She married Norman R. Smith on November 9, 1946. They made their home in Cyrene, raising four children; Mary Ann Weber (Ed), Marvin (Marilyn), Kevin (Jill), and Carolyn Maupin (Bob). Ida became a member of the Edgewood Baptist Church. Sunday School teacher, Vacation Bible School teacher, and treasurer were some of the roles Ida contributed to the church body. The church building was an older building and was heated with a wood stove. It caught the church on fire and members rushed to the church with hopes of saving the building. Ida Lou and another lady pulled the pulpit out of the burning building before the entire structure went up in flames. The little church stepped out in faith and decided to rebuild, and they asked Norman to dig the foundation for the new building. The building was erected by members of the church and it is still a very active church. Ida loved working together with Norman on the farm. She helped put in row crops, cared for the livestock, raised chickens, guinea, and ducks, as well as a large garden from which she canned abundant vegetables. She sewed the family apparel and studied her Bible. She loved horseback riding, mushroom hunting, and berry picking. She was an amazing cook, and loved to make cinnamon rolls. In 1980 Norman and Ida sold their farm at Cyrene and purchased a farm near Hatton with their son, Marvin. Upon moving there, they joined Rising Sun Baptist Church. Ida also joined the Hatton Extension Club and helped with the annual Hatton Craft Day. During the summer months, Ida would have her grandchildren take turns spending time on the farm. Ida, along with her friends, enjoyed fishing, frog hunting, riding horses, and quilting. In 1990, Norman and Ida moved back to the farm they still owned near Clarksville. A new home was built and they joined Dover Baptist Church. They hosted a yearly trail ride over the beautiful hills with friends across the state. Ida Lou Riley Smith is preceded in death by her parents; siblings; her two sons, Marvin and Kevin in 1999; her son-in-law, Ed Weber; and her husband of 70 years, Norman R. Smith, in 2016. She is survived by two daughters, Mary Ann Weber of Oak Grove and Carolyn Maupin (Bob) of Clarksville; two daughters-in-law, Marilyn Smith of Columbia and Jill Smith of Eolia; ten grandchildren: Rob Maupin, Tracy Maupin Brandenburger, Jason Smith, Rachel Smith Weekley, Brennan Weber, Justin Weber, David Weber, Hollie Smith Barron, Nikki Smith McCallister, and Joel Smith; 19 great-grandchildren; and one great-great-granddaughter. Pallbearers will be grandsons: Rob Maupin, Jason Smith, Brennan Weber, Justin Weber, David Weber and Joel Smith. Funeral services for Ida will be Wednesday, February 23, 2022 at 11:00 a.m. at Bibb-Veach Funeral Homes & Crematory. Visitation will be from 10:00 a.m. to 11:00 a.m. at the funeral home. Private family burial will be at Dover Cemetery.

The family of Ida Lou Smith created this Life Tributes page to make it easy to share your memories.