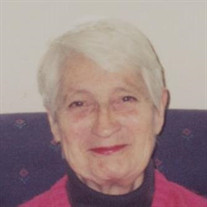 Ina Pauline Oberman, age 87, of Curryville, MO, passed away Sunday, January 12, 2020 at her residence surrounded by her family. A memorial mass will be held at 10:00 am on Saturday, January 25, 2020 at the St. Clement Catholic Church in St. Clement with Rev. Henry Ussher officiating. Burial will be held in the St. Clement Cemetery. Memorial visitation will be held from 4:00 pm until 7:00 pm on Friday, January 24, 2020 at the Bibb-Veach Funeral Home in Bowling Green. Pauline was born June 15, 1932, the daughter of John and Mary Matheny Sullivan. Growing up in Memphis, TN she was the youngest of 9 siblings and attended Catholic Schools. She met Howard Vance Oberman while he was stationed in Memphis with the United States Air Force. They married in 1951 and would move to the farm they purchased in rural Curryville, MO in 1952. Howard preceded her in death August 2, 2010. Survivors include her children Patricia Stubbs (Skip) of Carol Stream, IL, Gary Oberman (Mary) of New Hartford, Sheryl McNiff (Jim) of Littleton, MA and Ron Oberman (Susan) of New Hartford; grandchildren Justin Stubbs (Emily), Ashley Stubbs (Ken Kortas), Wendy Summers, Brandy Harrelson, Cori Dempsey, Janet McNiff, Jim McNiff (Lindsey), Harry McNiff and William Oberman (Stephanie); 10 great grandchildren; brother Harold Sullivan of Meridian, MS; sister Rose Lowrey of Memphis, TN; numerous nieces and nephews. She was preceded in death by her parents, husband, siblings Mary Ann Carter, Margaret Moeller, Johnny Sullivan, Wallace Sullivan, Lewis Sullivan and Thomas Sullivan. When Pauline wasn’t helping out on the family farm or being a stay at home mom, she enjoyed many activities. She enjoyed puzzles and word searches. Pauline was always up for traveling, whether it was back home to Memphis, TN, or family vacations to Chicago, Nashville or Boston. She enjoyed going to the riverboat casino and even traveled to Las Vegas to try her luck. Known for her banana bread and corn pudding, Pauline was widely known as a really good cook. Pauline enjoyed Halloween and always dressed up for her children and grandchildren. It was always a surprise to see what Pauline was going to be from year to year. Pauline was devoted to her Catholic faith and was a member of St. Clement Catholic Church. She was a member of the Farmer/Farmerette Club. She had a love for cats and enjoyed taking care of them. Everyone appreciated her wit and good sense of humor. Pauline will be greatly missed by all who loved and knew her. Memorials may be made to the Pike County Health Department and Hospice or the St. Clement Catholic Church. Online condolences may be left at www.bibbveach.com

Ina Pauline Oberman, age 87, of Curryville, MO, passed away Sunday, January 12, 2020 at her residence surrounded by her family. A memorial mass will be held at 10:00 am on Saturday, January 25, 2020 at the St. Clement Catholic Church in St.... View Obituary & Service Information

The family of Ina Pauline Oberman created this Life Tributes page to make it easy to share your memories.

Send flowers to the Oberman family.