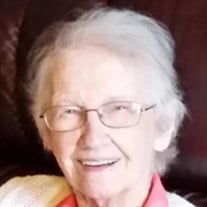 Irene King, 89 of Bowling Green passed away April 30, 2020 at Audrain County Medical Center, Mexico, MO. Graveside services will be held on Thursday, May 7, 2020 at Ashley Cemetery. Irene was born May 29, 1930 to Everett and Blanche (Harrelson) Parsons in New Hartford, MO. Irene had one sister, Flossie Mae Luebbers Pargeon, two brothers John Thomas (JT) Parsons and Bailey Parsons. On November 13, 1948 she married Guy L. King, who passed away August 2, 2011. Guy and Irene had three children, Steven L. (Judy Schuckenbrock), Stanley Dean (Vickie Niemeyer) and Linda Jean (Mike) Luebrecht. Irene was grandmother to Sarah (Sam) Dominguez, Katie King, Scott (Rosalyn) King, Seth (Natalie) King, Spencer King, Emily Luebrecht and Lane Luebrecht. Great grandmother to Isaac, Eva and Norah Dominguez; Elli and Levi Rainey; and Simon, Sterling, Fitzgerald and Ellis King. In the 1930’s the family traveled to California to find work picking crops. JT, 5 years old, helped take care of 1-1/2 year-old Flossie and 6 month-old Irene. Irene often told the story of a California land owner couple that wanted to adopt her. Irene grew up in the New Hartford area and started working at age 14 in the garment factory. Irene loved to work and had various jobs throughout her life, A&P, IGA, West End Market, Holman’s Market, Terrace Motel and Sears just to name a few. She was also a wonderful seamstress and had a custom sewing business for a time. She and Guy were ever the entrepreneurs - while working full time they always had a side business they were working on, such as delivering the St. Louis papers and even raising chinchilla mink in the attic. Along with Steve and Judy, they owned and operated King’s Liquor and Package store at two locations and later started the first convenience store in Bowling Green. What is now Crossroads started from a full service Texaco filling station. One evening while Irene was working alone, a young man came in with a shotgun and demanded money. Irene was able to convince the young man not to ruin his life by doing this and if he would leave she wouldn’t call the police. The young man left. After selling Crossroads, Guy and Irene opened a convenience store in Middletown, MO and lived there until the store burned. They returned to Bowling Green and purchased Crossroads again! After a few years they sold it again and both retired. After retiring, Irene worked for the Green Thumb program at the NECAC office in Bowling Green. After retiring from there, she worked at DiDi & GiGi’s Boutique until its close. Irene was 84 at the time. Never one to be idle, she did volunteer work for Pike County Home Health and Hospice until her fall in January 2020. She loved working and talking to people. She loved her family and friends, she had an infectious laugh, she was impatient and opinionated, she loved to play pitch and dance, and she was an incredible cook. A family and friend favorite was her fried chicken. It was even suggested she start a fried chicken stand. She would help those she loved in any way she could. She will be missed terribly by all who knew and loved her. Memorials may be made to Pike County Home Health and Hospice at https://pikecountyhospice.com/foundation/donate/ or donor’s choice. Online condolences may be left at www.bibbveach.com

Irene King, 89 of Bowling Green passed away April 30, 2020 at Audrain County Medical Center, Mexico, MO. Graveside services will be held on Thursday, May 7, 2020 at Ashley Cemetery. Irene was born May 29, 1930 to Everett and Blanche (Harrelson)... View Obituary & Service Information

The family of Irene King created this Life Tributes page to make it easy to share your memories.

Send flowers to the King family.