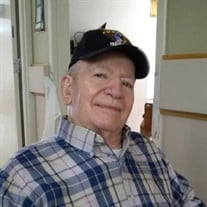 Funeral services for Irvin H. Fuerst will be held on Thursday, November 5, 2020 at 10:00 a.m. at Bibb Veach Funeral Home in Bowling Green. Visitation will be held on Wednesday, November 4, 2020 from 4-7 p.m. with burial at Keith Cemetery at New Hartford, MO. Mr. Fuerst passed away at the Missouri Veterans Hospital in Columbia on Friday, October 30, 2020. Irvin Herbert Fuerst was born July 24, 1942 at Normandy, MO at his parent’s home. He is the second son of Anthony August Fuerst and Flora Korman Fuerst. He has four siblings: Richard (deceased), Arlene, Cliff, and Edward. His family bought property at New Hartford, MO, while Irvin was in his early high school years. He stayed with a close family friend while he attended Bowling Green High School and graduated from the school in May, 1961. During his high school years in Bowling Green he was active in weightlifting. His best friend Joey Moss gave him a lifelong nickname “Poopsie” because of the way he would lift weights. His son, Terry, also has the same nickname. Upon graduation he worked for two years for Pepsi and Pike County Roads until entering the Navy on March 21, 1963. Upon completion of basic training at Great Lakes he learned he was the top of his basic training class. He was assigned to the USS Cone as an Engineer Man (Engine). He was Honorably Discharged February 25, 1968. He was on liberty in November 1963 in Italy when President John Kennedy was assassinated. He has stated the tension on his ship was very high as all crew was called back to the ship upon news of the assassination. Boxing matches were common on the main deck and bets were taken to make extra money. Irvin would box and win often to make extra money to send back home to his family. Because of his height and love of boxing he was given the nickname “Shorty” while on the USS Cone. Irvin began working at Hercules, Louisiana, MO, after his discharge from the Navy as a pipefitter in 1968. Over the course of his employment of 30 years he rose to the position of Shift Superintendent where he oversaw the operations of the plant for his shift. Irvin was gifted with his hands in the fields of pipefitting, carpentry, electrical and other areas which his son also inherited from him. He retired after 30 years when he had major heart problems. Irvin married his first wife, Lana Caldwell, in December 1965. His first child, Terry, was born the next year. A daughter, Shelly, arrived in March 1970. His son, Terry, is married to Lori Bigley and resides on the family farm in New Hartford. Irvin’s granddaughter Kennedy, lives in St. Louis. Irvin married his second wife, Diane Miller, on June 12, 1979. They met on a blind date that was arranged by his ex-sister-in-law. Irvin tells a story of his wife’s first and only hunting trip with him. They were squirrel hunting when she saw a squirrel and a woodpecker in a tree. She took aim at the squirrel but hit the woodpecker instead on the branch below the squirrel. It was her last hunting expedition since Irvin thought it was so amusing. Irvin and Diane built a home on the family farm where she currently resides. In 2004 they celebrated their 25th wedding anniversary by taking a cruise to Alaska. Irvin was a disciplined individual who was self-assured in making his own decisions. He enjoyed researching the medical field and at one-point thought about becoming an EMT. His Grandfather Korman would take him hunting and fishing as a child which developed into a love for hunting and collecting guns as he grew up. He is a super marksman and collected guns. He is very helpful to friends and family and enjoys working together with others to complete projects. He was preceded in death by his parents; daughter, Shelly; and brother Richard. He is survived by his spouse, Diane of New Hartford; son Terry and wife Lori of New Hartford; granddaughter Kennedy of St. Louis; brother Cliff and wife Debby of New Hartford; brother Edward of New Hartford; sister Arlene and husband Bob of St. Charles; and nieces and nephews. Pallbearers are: Jim Craig, Mike Craig, Tom McCleery, Tracy Northcutt, Walter Northcutt, and Rick Daugherty. Honorary pallbearers are: Randy Morris, Jesse Lucas, Brad Lucas and Henry Parrish. Memorials may be made to the Keith Cemetery of New Hartford, MO.

The family of Irvin "Poopsie" Fuerst created this Life Tributes page to make it easy to share your memories.

Funeral services for Irvin H. Fuerst will be held on Thursday,...

Send flowers to the Fuerst family.