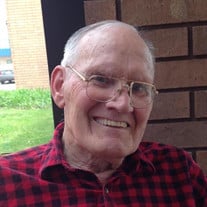 James Marshall Adams, age 80, of Bowling Green passed away October 6, 2015 at Moore Pike Nursing Home in Bowling Green. Funeral services will be held 11:00 a.m. Friday October 9, 2015 at the Harvest Time Ministries in Bowling Green with Pastor Marshall Adams and Pastor Jeannette Connell officiating. Burial will be in the Oak Grove Cemetery. Visitation will be held Thursday from 4:00 – 8:00 pm at the Bibb-Veach Funeral Home in Bowling Green and Friday from 9:00 a.m. until time of service at Harvest Time Ministries. James was born January 2, 1935 the son of Luther Marshall and Sylvia Osbourne Adams at home in the hills of West Virgina. In his late teens he met the love of his life Martha Archer from Ohio. They were married in Indiana at age 16 and 18. She survives. Other survivors include sons Richard James Adams and wife Karla, William Marshall Adams and wife Marilyn, Marshall James Adams and wife Shellie, James Michael Adams and wife Kimberly; daughters Judith Ann Duff and husband Charles, Jeannette Elizabeth Connell and husband George; twenty grandchildren; twenty six great grandchildren; and one great great grandchild; one brother John Edwards Adams; sisters Lavina Mae McCray, Wanda Lee Shezreze, Joanne Lou Branson, Marilyn Huff and Virginia Dare Raikes. He was preceded in death by his parents; grandson Jacob Daniel Connell; one brother Homer D. Adams and two sisters Mary Ruth Adams and Neva Lynn Adams. James and Martha lived in Ohio, West Virgina, Virgina and Missouri. James was a bus driver in Washington D.C. in his younger years but did carpentry like his father, from a young lad to adult life. He built his homes that he lived in and was also skilled in electrical and plumbing. He was a self-taught man, and believed in hard work. James passion was his Lord Jesus. He enjoyed studying the word, he taught Sunday school, he was a Sunday school superintendent, a deacon and also a license minister of Mt. Zion Community Church and World Bible Way Fellowship. James loved evangelism and passing out tracks on the street. He was a man of prayer. James loved to go for long rides through the country and the West Virginia Mountains. He enjoyed the outdoors, and hunting and fishing with sons and grandsons. He loved family and was a strong man of integrity and character. Pallbearers will be Richard Adams, William Adams, Marshall Adams, Michael Adams, Matthew Adams and Levi Adams. Memorials may be made to the family c/o Bibb-Veach Funeral Home.

The family of James Marshall Adams created this Life Tributes page to make it easy to share your memories.

Send flowers to the Adams family.