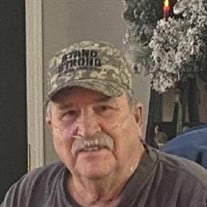 James Robert Andrews, known as Bob, passed away Sunday, May 30, 2021 at his home in Bowling Green. Bob fought a long struggle with COPD, but died peacefully surrounded by his family and many friends offering prayers. A Mass of Christian Burial for Bob will be held at 11:00 a.m. on Thursday, June 3, 2021 at St. Clement Catholic Church with Fr. Lou Dorn officiating. Burial will be at St. Clement Cemetery. Visitation will be Thursday from 9:00 a.m. until the time of services at St. Clement Church. Bob was born June 1, 1944 in Hot Springs, Virginia to Kenneth and Clementine Andrews. He was united in marriage to Ginny Andrews on December 6, 1980. She survives. Bob graduated from Covington, Virginia High School in 1962 and worked at the Hercules plant for a year before he was drafted into the United States Army where he served 2 years in Germany. He returned to work at Hercules when his time of service was over. Bob came to Missouri in 1979 to work the Hercules strike in Louisiana, Missouri, where he met his wife, Ginny and step-son, Chad. Bob eventually moved to Missouri with his 2 children, Cheryl and Bryan. He resided in Missouri for the rest of his lifetime. Bob worked various jobs in Missouri and retired on disability in 2004 as the Quality Control Manager for Home Products in Louisiana, Missouri. Bob was a member of the St. Clement Catholic Church, Knights of Columbus, and was involved in may church activities. His hobbies included gardening, woodworking projects, hunting, fishing, and most of all, spending time with his family and grandchildren. Bob will always be remembered for “never giving up”. No matter how difficult the project, he would see it through with patience and perseverance. This same diligence took him through over 20 years of suffering with COPD, and he never, ever complained. Bob is survived by his wife, Ginny; step-son, Chad Thomas (Jeana) of Jefferson City, Missouri; Cheryl Miller (Richie) of Wentzville, Missouri; Bryan Andrews (Emily) of Columbia, Missouri; grandchildren: Eliza and Evan Thomas of Jefferson City, Derek and Luke Miller of Wentzville, Shiloh Cooper of Kansas City, Missouri, and Brayden and Brynn Andrews of Columbia; sisters, Frances and Ann of Hot Springs, Virginia; brothers, Kenneth, Ronnie, and Donnie of Virginia; and many nieces and nephews. He was preceded in death by his parents; his sister, Betty; and his sister, Tillie. Pallbearers will be Larry Moore, Larry Finley, Allen Finley, Ansel Niemeyer, Garry Hendrix, and Joe Mudd. Memorials may be made to Heartland Hospice or St. Clement Catholic Church for masses.

James Robert Andrews, known as Bob, passed away Sunday, May 30, 2021 at his home in Bowling Green. Bob fought a long struggle with COPD, but died peacefully surrounded by his family and many friends offering prayers. A Mass of Christian Burial... View Obituary & Service Information

The family of James Robert Andrews created this Life Tributes page to make it easy to share your memories.

James Robert Andrews, known as Bob, passed away Sunday, May 30,...

Send flowers to the Andrews family.