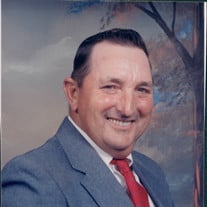 James “Jim” Edward Hubert, age 81, of rural Curryville passed away Saturday June 10, 2017 at his home. Funeral services will be held 10:00 am on Wednesday June 14, 2017 at the Bibb-Veach Funeral Home in Bowling Green with Rev. Jerry Gamm and Rev. John Birkhead officiating. Burial will be in the Curryville Cemetery with military honors being conducted by Missouri Military Honors and VFW Post #5553. Visitation will be held from 4:00 pm until 8:00 pm on Tuesday at the funeral home. He was born October 25, 1935 in Frankford, the son of Lloyd Kennedy and Goldie Marie Baker Hubert. He married Mary Helen Johnson on October 4, 1958 at the Southside Baptist Church in Vandalia. She survives. Other survivors include one son, Daniel (Tina) Hubert of Bowling Green and their children; Denise (Lance) Hoag of Hannibal (children Alexis and Macy), Luke Hubert of Saverton and Chrisanne Hubert (Cody Poor and Gavyn) of Hannibal. He had one daughter Marilyn Hubert of Curryville and her children; Brian (Heather) Worthington (Jaycob, Ashton and Cooper) of Curryville, Justin (Michelle) Worthington (Rylee) of Bowling Green, Ashleigh (Clayton) Schoneboom (Layla and Emma) of Curryville and Steven Alexander (Danielle Noll) of Curryville. Jim had one brother, Lloyd (JR) (Dorothy) Hubert and two sisters Marie Baker and Mary Jane (Wayne) Glaspie all of Curryville. He also is survived by several nieces and nephews. He was preceded in death by his parents, and a nephew Wayne Baker. Jim graduated from Bowling Green High School in 1953. During his senior year in high school he was on a State Meat Judging Champion team . That same year he entered the Naval Reserves and was later drafted into the Army and served 27 ½ months active duty. He served during the Cuban Missile Crisis and Bay of Pigs. He also drove for the Pentagon. Jim has been a farmer his entire life. He also had a few other jobs in his younger years. He worked at a feed store in Curryville, at A&P as a meat cutter, at a garment factory in Bowling Green and in 1962 he started and managed a liquid and anhydrous ammonia fertilizer plant in Curryville. He did this until 1968 when he resigned to be able to give his farm the attention this required. Jim started out with 40 acres and steadily increased this until it was over 1600 acres. In 1964 he was nominated as an outstanding young farmer of the year for Pike County. He served as a board member for the Bowling Green Rural Fire Department, Hickory Grove Community Center, MFA Oil Company, Spencerberg Cemetery and the Louisiana Port Board. He also served on the Pike County Soil and Water Conservation District Board of Supervisors for 16 years. He had coached Khoury Leage ball. Jim enjoyed pulling in the tractor pulls and also the 2 wheel drive trucks. He loved fishing and hunting, especially deer. Above all else, Jim enjoyed visiting with friends and family and made daily trips to the coffee shop (MeMe’s) in Curryville. He enjoyed teaching his grandkids as much as he could. He loved telling stories. He never met a stranger and made friends where ever he went. Serving as pallbearers will be Brian Worthington, Justin Worthington, Luke Hubert, Steven Alexander, Lance Hoag and Clayton Schoneboom. Serving as honorary pallbearers will be Neil Beatty, Jack Reid, Frank Worthington, Tom Flamm, JC Bufford, Bob Hickerson and Henry Watson. Memorials may be made to VFW Post #5553, Kidney Foundation, Pike County Hospice or American Cancer Society.

The family of James "Jim" Edward Hubert created this Life Tributes page to make it easy to share your memories.

Send flowers to the Hubert family.