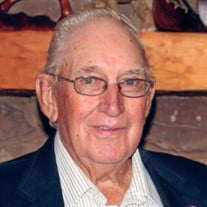 James “Jim” William Scherder, age 85 of Bowling Green, passed away Monday, September 14, 2015 in his home. Visitation will be held be held from 4:00 p.m. to 8:00 p.m. Thursday, September 17 at Bibb-Veach Funeral Home in Bowling Green. Funeral services will be on September 18 at 10:00 a.m. at St. Clement Catholic Church with Rev. Robert W. Peckman officiating. Burial will be in the St. Clement Cemetery with full military honors being conducted by VFW Post # 5553 and the Missouri Military Honors Team from Jefferson Barracks. Jim was born on August 12, 1930 in St. Clement, MO, the son of Fred and Eleanor (Orf) Scherder. He married JoAnn Feldmann on November 4, 1961 at St. Clement Catholic Church. She survives. Other survivors include: sons Greg Scherder (Sheila) of Peoria, Richard Scherder of Lake St. Louis; daughters Karen Hood (Eric) of Troy, Linda Jaeger (Asa) of Clarksville, Eileen Kadlec (Frank) of Bowling Green and Lisa Hamlett of Troy; grandchildren Ethan, Hannah, and Maggie Scherder, Andrea Walker, Landon and Sydney Hood, Lauren and Brad Jaeger, Courtney and Kacey Kadlec, and Lane Hamlett; one surviving brother Harry (Joyce) Scherder and many nieces, nephews, and cousins. He was preceded in death by his parents and brothers Ray Scherder, Al Scherder, and Cyril Scherder. Jim served in the United States Army from 1952-1953 and was a Sergeant First Class. He was a veteran of the Korean War and served nine months on the front lines. He received numerous citations and honors for his military service. Jim lived and farmed all his life in Bowling Green. He was always good-hearted and willing to give others a helping hand. He loved being a farmer and was known for his knowledge of cattle. Later in life, he enjoyed his morning coffee with his friends at Feeder’s Grain and Friday cattle sales at the Sale Barn. He was an active member of the St. Clement Church, Knights of Columbus, and VFW. He enjoyed playing cards, working on the farm, and watching the St. Louis Cardinals. Most of all, he enjoyed watching his kids and grandkids play sports and do activities. Serving as pallbearers are his nephews: Kenny Scherder, Kevin Scherder, Gary Scherder, David Scherder, Fred Scherder, and Tony Scherder. Memorials may be made to St. Clement Catholic Church or to Pike County Health Department, Home Health and Hospice.

The family of James W Scherder created this Life Tributes page to make it easy to share your memories.

Send flowers to the Scherder family.