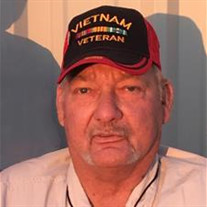 James Kevin Tarpein, age 64, of Bowling Green, passed away Sunday, May 22, 2016 at the Boone Medical Center in Columbia. Funeral services will be held at 10:00 am, Friday, May 27, 2016 at the Ariel Christian Church in Monroe City. Burial will be in the Ariel Christian Church Cemetery. Visitation will be held from 4:00 pm until 8:00 pm on Thursday at the Bibb-Veach Funeral Home in Bowling Green. James was born May 2, 1952, the oldest of four children to James Franklin Tarpein and Lela Mae Walker Tarpein. He is survived by his wife Mary Ruth McClintock Tarpein as well as his children Michael James Tarpein of Jackson, TN, Mary Ann Scherder and husband Matt of New Hartford, MO and Julia Elizabeth Tarpein and significant other Tom Whitehead of Long Beach, CA. Due in August 2016 is his first grandchild Addison Scherder ; Uncle Fred Leroy Tarpein and wife Maxine, three siblings Terry Wayne Tarpein, Deanna Moylan and husband Bob, Ricky Allen Tarpein and wife Corina, and numerous nieces, nephews, and cousins. Also surviving are his special K9 friends Charlie Brown, Ryder James, and Winston as well as one feline Ralphy. He was preceded in death by an infant brother Paul, his mother Lela and father James, as well as uncles and aunts on the Tarpein and Walker side of the family. He attended grade school at Garden Grove District #20 in Adair County then attended Brashear Adair County RII school grades 7 through 12. After graduation in May of 1970, he entered the US Army at Fort Campbell, Kentucky for Basic Training and then went to Fort Polk, Louisiana for Advanced Infantry Training and Airborne School at Fort Benning, Georgia. He deployed to Vietnam serving with the 173rd Airborne Brigade in the Central Highlands of Vietnam as an Infantry Man RADIO Operator, M203 Grenade Operator, and M60 Machine Gun Operator. He was deployed to Fort Campbell, Kentucky with the 173rd Airborne and was assigned to the 101st Airborne Division. In 1973, he was discharged from the Army as Sgt. E5, and enrolled at Northeast Missouri State University in Kirksville, Missouri. While at NMSU he worked for Campus Police and in 1975 joined Army ROTC and completed the Army ROTC Flight Training in 1976, and graduating December 1976 with a Criminal Justice Major. He was commissioned US ARMY as Regular Army Officer 2nd Lt and reported to the Military Police Officer course at Fort McClellan, Alabama. Upon graduation from the MP Officer School, he was assigned to the 25th Military Police Company 25th Infantry Division at Schofield Barracks, Hawaii. On July 13, 1979 he was married to Mary Ruth McClintock at Ariel Christian Church in Ralls County, MO and they returned to Hawaii where Lt. Tarpein was assigned as Exec Officer HQ Company 25 Aviation Battalion at Wheeler Army Airfield. Cpt. Tarpein and Wife Mary returned to Anniston, Alabama in 1981 where he attended the MP Officer Advance Course. Upon graduation, he was assigned to training school and would go on to extensively implement standards for all company grade MP Officers. In 1983 a son, Michael J. Tarpein, was born at the Army hospital in Fort McClellan, Alabama. In 1984, Captain Tarpein and family were assigned to law enforcement command at Fort Campbell, Kentucky where he served as BN S4, Commander of Stockade, BN S1 and drug control division. Two daughters were born at the Army hospital at Fort Campbell, TN. Mary Ann in 1986 and Julia Elizabeth in 1988. In September 1988, Captain Tarpein separated from the US Army and joined the Army Reserve as Major O4. In 1993, he resigned his commission and joined the Missouri Army National Guard. While in the Missouri Army National Guard, he was deployed to Panama 3 times, Honduras 1 time, Nicaragua 1 time, Germany 1 time, Italy 1 time, and Kosovo 1 time. He faithfully served until being discharged in 2008 with a total of 38 years of military service. He was a member of VFW post 4610 holding the office of commander and district 17 Jr Vice commander. He was also a member of the American Legion post 349. As a civilian, he worked as a police officer in Clarksville, TN, Deputy Sherriff in Ralls County Missouri, Police Officer in Monroe City, Missouri, Police officer in LaGrange, Missouri, and Chief of Police in LaGrange Missouri. He also worked for Pike Grain Company of Louisiana, Missouri, custodian for the Louisiana Missouri School District, Truck Driver for Gully Transportation, Truck Driver for Schneider Logistics, as well as his favorite job - instructor of in school suspension for the Winfield Missouri School District. Serving as pallbearers will be Wallace Ahrens, Danny Johnson, Whitney Sallin, Clarence Estes, Jim Darnell, Matt Scherder and Matt Murry. Memorial may be made to the family in care of the funeral home.

James Kevin Tarpein, age 64, of Bowling Green, passed away Sunday, May 22, 2016 at the Boone Medical Center in Columbia. Funeral services will be held at 10:00 am, Friday, May 27, 2016 at the Ariel Christian Church in Monroe City. Burial will... View Obituary & Service Information

The family of James Kevin Tarpein created this Life Tributes page to make it easy to share your memories.

Send flowers to the Tarpein family.