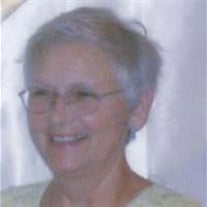 Janet Ann Augustine Siefkas, age 84 of Louisiana, passed away Friday June 21, 2019 at St. Luke’s Hospital in Chesterfield, MO. A fellowship gathering will be held at 1:00 pm Sunday June 23, 2019 at the Providence Concord Presbyterian Church in Vera, MO with a memorial service at 2:30 pm. Janet was born October 14, 1934 in Creston, IA, the daughter of Benjamin and Grace Hanson Augustine. She grew up in Creston and attended school in Orient, IA. After Highschool she attended Simpson College in Indianola, IA where she met M.L. Jack Siefkas in May of 1952, got engaged in December of 1953 and married Jack December 17, 1955 after he returned from Germany having served in the United States Army. Survivors include husband Jack Siefkas of Louisiana, children Jody Fisher (Jim) of Middletown, Joseph Siefkas (Stephanie) of Frankford and Julie Douglas (Keith) of Houston, TX; grandchildren Caleb Siefkas, Matthew Douglas, Madeline Griggs (Chris), Catie Fisher, Jazmin Gac, Kaitlyn Douglas, Adrian Siefkas, Cali Sanders and Jack Watson; many nieces, nephews and relatives. She was preceded in death by her parents and brother Frank Augustine. Janet loved the arts. Having obtained her Bachelor’s Degree from Simpson College, Janet taught music until she turned her focus and devotion to her family. She enjoyed nature and conservation. You could often times find her watching birds and reading about insects. Janet enjoyed being connected to a church and being a part of a congregation, having been a member of the Methodist and Presbyterian Church. She was a lover of sports, especially baseball. Most of all she loved being around family, especially her grandchildren, and celebrating events with them. Janet was a selfless and generous person, always putting others first. Memorials may be made to the Hope Center in Bowling Green.

The family of Janet Ann Augustine Siefkas created this Life Tributes page to make it easy to share your memories.