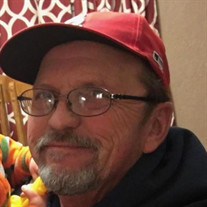 Jeffrey Dean Patton, 66, of Bowling Green, passed away Saturday, October 30, 2021 at St. Joseph West Hospital in Lake St. Louis, Missouri. Funeral services for Jeff will be Friday, November 5, 2021 at 2:00 p.m. at Bibb-Veach Funeral Homes & Crematory in Bowling Green. Burial will be in Memorial Gardens Cemetery in Bowling Green. Visitation for Jeff will be Thursday, November 4, 2021 from 4:00 p.m. to 7:00 p.m. at the funeral home. Jeff was born October 23, 1955 in Kirkwood, Missouri to Russell and Dorothy Henry Patton. Jeff was a lifelong Pike County resident. He attended Bowling Green High School, where he ran track and played with the band. Jeff had been employed at Pike Amusement and LA Press Journal Printing until his retirement four years ago. Jeff enjoyed spending time with his girls and his grandkids; his life revolved around them. He was an avid St. Louis Cardinal fan, and loved listening to old classic rock music. Jeff was a proud Trump supporter. He was a caring and giving person, and always had a smile on his face. If anyone ever needed a father figure in their life, Jeff was there to fill that role. Jeff is survived by his daughters, Mallorie Charlton (Josh) of Bowling Green, Kelsey Shepard of Pierceton, Indiana, and Tia Patton of St. Charles, Missouri; grandchildren, Jackson, Marshall and Ryland Charlton, and Kiersey, Ender, and Luna Shepard; brothers, Gary Patton (Gavaughna) of Bowling Green, and Allan Patton (Tanja) of Columbia, Missouri; along with nieces, nephews, and extended loving family. He was preceded in death by his parents; a sister, Pat Galen; and a brother, Harvey Patton. Pallbearers will be Josh Charlton, Johnny Ingram, Jackson Charlton, Richie Holland, Lyndell Raufer, and Scott Boyer. Honorary pallbearers will be Marshall Charlton, Ryland Charlton, Kiersey Shepard, Ender Shepard, Luna Shepard, and Jackie Stockamp.

The family of Jeffrey Dean Patton created this Life Tributes page to make it easy to share your memories.

Send flowers to the Patton family.