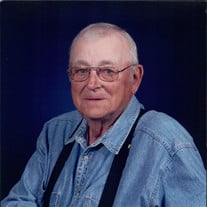 Jerome Luebrecht, age 86 of rural Bowling Green passed away Wednesday, June 20, 2018 at his home surrounded by his family. A Mass of Christian Burial will be held at 10:00am Monday, June 25, 2018 at the St. Clement Catholic Church with Rev. Jason T. Doke, S.T.L. officiating. Burial will be in the St. Clement Cemetery. Visitation will be held from 4:00pm until 8:00pm on Sunday at the church. Services are under the direction of Bibb-Veach Funeral Homes in Bowling Green. Jerome was born May 18, 1932 in Bowling Green, the son of Henry Martin and Mary Gesina Deters Luebrecht. He married Eileen Tinsley July 26, 1951 at Sacred Heart Catholic Church in Vandalia. She preceded him in death October 23, 2000. Survivors include sons Tim Luebrecht (Lori) of Farber, Stephen Luebrecht (Zenda), Martin Luebrecht (Janice), Paul Luebrecht (Linda), Pat Luebrecht (Vicki) and David Luebrecht (Kim) all of Bowling Green; daughters Lois Schumacher (Michael) and Victoria Niemeyer (Eric) of Bowling Green, Janet Epperson (Jerry) of Vandalia, Susan Mollerus (Rick) of Curryville and Cheryl Mollerus (James) of High Ridge; 31 grandchildren; 34 great grandchildren; brothers Kenneth Luebrecht (Thelma) of Bowling Green and Lawrence Luebrecht (Doris) of Farber; sisters Mary Jane Sullivan of Atlanta, GA and JoAnn Cannon (Bobby) of Bowling Green; many nieces and nephews. He was preceded in death by his parents; wife; brothers Clarence Luebrecht and Dennis Luebrecht; sister Edna Gamm. Jerome lived in Pike County his entire life and spent the majority of his time farming and milking cows. He owned and operated Luebrecht Dairy since 1950. Jerome was a member of the St. Clement Catholic Church as well as a life member of the St. Clement Knights of Columbus where he served for over 70 years and was recognized along with his family as a KofC family of the year. He also served on the St. Clement School advisory board. Jerome enjoyed fishing, playing cards, and watching his purple martins. He was a member of the Thursday night poker club. Although he was retired from farming, Jerome still enjoyed working hay. Most of all, he enjoyed his children and grandchildren. Serving as pallbearers will be Tim Luebrecht, Stephen Luebrecht, Martin Luebrecht, Paul Luebrecht, Pat Luebrecht and David Luebrecht. Serving as honorary pallbearers will be his grandchildren and great grandchildren. Memorials may be made to the Pike County Home Health and Hospice, St. Clement Church or St. Clement School.

Jerome Luebrecht, age 86 of rural Bowling Green passed away Wednesday, June 20, 2018 at his home surrounded by his family. A Mass of Christian Burial will be held at 10:00am Monday, June 25, 2018 at the St. Clement Catholic Church with Rev.... View Obituary & Service Information

The family of Jerome Luebrecht created this Life Tributes page to make it easy to share your memories.

Send flowers to the Luebrecht family.