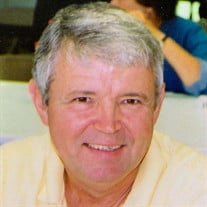 James Edward (Jim) Grimes, age 72, passed away March 5, 2019 at Sugar Creek Assisted Living at the Arbors. Funeral services will be held at 10:00am Monday, March 11, 2019 at the Bibb-Veach Funeral Home in Bowling Green with Lay Minister Greg Wyble officiating. Burial will be in the Eolia Cemetery. Visitation will be held from 4:00pm until 8:00pm on Sunday at the funeral home. James Edward Grimes was the fourth of five children born to the late Thomas & Florence Evering Grimes on December 20, 1946. Jim is survived by his wife Martha Frances (Fran) Grimes of Eolia; daughter Ashley Elizabeth Engler (Clinton) of St.Clair; son Drew Allen Grimes (Stephanie) of Eolia; grandchildren; sibling Joyce Owens of Palmyra, Les and Bonnie Grimes of O’Fallon; brother in law Kevin Hurd of Lake St. Louis; nieces and nephews, and cousins. He was preceded in death by his brother Tom Grimes and wife Nell, brother-in-law Roy Owens and sister Sandi Hurd. After attending elementary at the public school in Eolia, he went on to finish his education at Clopton. Following graduation, Jim went on to continue his education at Hannibal LaGrange College and enlisted as a member of the United States Navy Reserves where he was placed on active duty. In 1971, he met his bride and married Martha Frances Houston on June 23, 1973. While Jim and Fran built two of their homes, owned and operated businesses, and enjoyed going to auctions to find antiques; their greatest joy was their children. In 1981, Jim became a father to Ashley Elizabeth Grimes. Throughout Ashley’s adolescent years you would find the duo playing pitch & catch when he wasn’t coaching a team. Jim was adamant on making Ashley the best pitcher she could be. In the spring they always enjoyed mushroom hunting. In 1985, Jim & Fran added to their family with Drew Allen Grimes. Jim and Drew spent countless hours hunting and fishing. Jim thoroughly enjoyed having the opportunity to call a turkey in for Drew to shoot. In 2009, Jim’s family continued to grow as Drew and Stephanie were joined in marriage, proceeded by Ashley to Clinton Engler the following year. In 2012, Jim found a love that he had never experienced: becoming a grandfather. Brooke Elizabeth Engler, Luke James Grimes, and Aubrey Elizabeth Grimes were the light of his life who could do no wrong. Jim also had a bonus-granddaughter,Maylee, who he loved dearly and always enjoyed spending time with her. Jim enjoyed hunting and fishing, wood working, listening to music, especially Elvis, playing pool, cards and ping-pong. He was a hard worker. Jimworked in maintenance at Holcim as well as ownedand operated a car wash and laundromat from 1987 until 2017. Most of all, Jim loved his grandchildren. Serving as pallbearers will be Joey Akers, Tom White, Donnie Tucker, Mitchell Houston, Zakk Eivins, and Dan Brown. Memorials may be made to The Clopton Alumni Association Scholarship Fund or the Eolia Cemetery.

The family of Jim Grimes created this Life Tributes page to make it easy to share your memories.

Send flowers to the Grimes family.