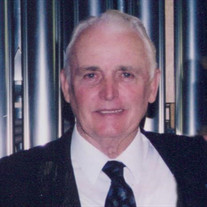 Jimmie Francis Nolan, 85, of Olney, Missouri passed away peacefully on September 24, 2019, surrounded by his loving family. Funeral services will be held Friday, September 27, 2019 at 11:00 a.m. at Bibb-Veach Funeral Home in Bowling Green with Gary Chamberlain officiating. Burial will be held at Memorial Gardens Cemetery in Bowling Green, Missouri. Visitation will be 4:00 p.m. to 8:00 p.m. Thursday at the funeral home. Jim was born July 13, 1934 in rural Pike County Missouri. He was the only child of Jesse and Margery (Chamberlin) Nolan. He began his early education at Woodlawn, followed by Concord, and then graduated in the Bowling Green class of 1952. He enlisted in the United States Armed Forces in the 82nd Airborne Division from 1957 to 1960. On January 28, 1961, he was united in marriage to Bethsheba E. Kirchoff (Susie) in St. Clement, Missouri. Jim was involved in farming, trucking, electrical work, and could do most anything. He was an avid hunter from a young age and loved to shoot trap; later taking his sons and grandchildren on these outings. He enjoyed weekends at the lake, camping, and fishing with his family. Surviving is his beloved wife of 58 years, Betty Nolan of Olney; his children and their spouses, Kevin Nolan of Sargent, Texas, Jamie (Tammy) Nolan of Olney, and Aaron (Tina) Nolan of Olney. He is further survived by his grandchildren and their spouses, Jesse (Danielle) Nolan, Ashley (Derek) Labbee, Jordan Nolan, Karsen Nolan, Nicholas (Nick) Nolan, and Katharyn (Kate) Nolan. Also great-grandchildren, Kylie, Abigail, Jacob, Luccas, Olivia, Liam, Elizabeth, Alice, Levi, and Maverick. Pallbearers will be Jesse Nolan, Nick Nolan, Derek Labbee, Joey Hutchinson, Darren Mueller, and Gary Odom. Memorials may be made in care of the funeral home.

The family of Jim F. Nolan created this Life Tributes page to make it easy to share your memories.

Send flowers to the Nolan family.