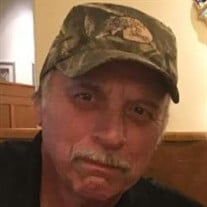 Jimmie Guy (Jim) Sperry, 70, of Bowling Green, passed away Friday, December 31, 2021 at his home after a lengthy illness. A Celebration of Life will be held at a later date. Bibb-Veach Funeral Homes & Crematory in handling cremation rites. Jim was born November 13, 1951 in Washington, Missouri to Louis and Ester Wiegand Sperry. He was united in marriage to Rita Faye Grote on October 10, 2009, after beginning their relationship in 2000 while both working at Hercules. She survives. Also surviving are two sons, Michael Sperry (Tamaica) of Alabama, and Ryan Sperry, also of Alabama; step-daughter, Tennille Lester (Michael); grandchildren Halo and Story Lester, Briana Sperry, Jenna Sperry, and Caitlin Sperry; sister, Sandra Sperry of Lawrenceville, Georgia; brother, Ronnie Sperry (Terry) of Louisiana, Missouri; best friend, Bob Lee; two brothers and sisters-in-law; and many nieces and nephews. He was preceded in death by his parents, and brother, Roger Sperry. Jim began working at Kamp Togs directly out of high school, where he remained for five years. He spent the next 30 years working at Hercules, where he retired as an I.T. Supervisor. Jim spent his years working and raising his boys. He enjoyed going on Grote family vacations. Jim loved watching nature and feeding the animals; he was especially fond of cats. He also enjoyed mowing his yard and working in his work shop. Jim enjoyed going to casinos, and was a collector of antique tools. One of his favorite things to do was to give his wife flowers and a card every week. Jim was a very thoughtful and caring man, and will be greatly missed by all who knew him. Memorials may be made to the Diabetes Association, or the Donor’s Choice.

Jimmie Guy (Jim) Sperry, 70, of Bowling Green, passed away Friday, December 31, 2021 at his home after a lengthy illness. A Celebration of Life will be held at a later date. Bibb-Veach Funeral Homes & Crematory in handling cremation rites. Jim... View Obituary & Service Information

The family of Jimmie Guy Sperry created this Life Tributes page to make it easy to share your memories.

Send flowers to the Sperry family.