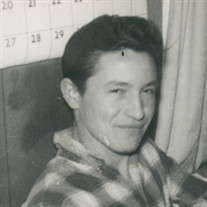 John Bailey, age 71, of Frankford passed away February 7, 2018 at the Hannibal Regional Hospital. Graveside services will be 11:00 a.m., Saturday, February 10, 2018 at the Fairview Cemetery in Frankford. Survivors include son Johnny W. Bailey (Michelle) of Frankford; daughters Sharon Howard (Randy), Kim McBride (Leonard) and Angela Bailey (Jason) all of Clarksville; grandchildren Jessica, Jordon, Brandy, Brianna, Coty, Chelsea, Kayleigh, Kylie, Kaden, Tricia, Daisy, Cash, Dusty; great grandchildren; brothers James Bailey (Jeanette) of Frankford, Jerry Bailey of Frankford; sister Jessie Charlton of Frankford; nieces, nephews and cousins. He was preceded in death by his parents, four sisters, two brothers, and granddaughter Alexis Rickey. John was born June 18, 1946 in Frankford the son of Squire Henry and Beulah Frances Allen Bailey. He lived in Frankford all of his life and was a logger for 20 plus years. He loved fishing, hunting, his dogs and most of all spending time with his family. Memorials may be made to the family. Pallbearers will be Jordon Bailey, and Coty Rickey.

The family of John Clark Bailey created this Life Tributes page to make it easy to share your memories.

Send flowers to the Bailey family.