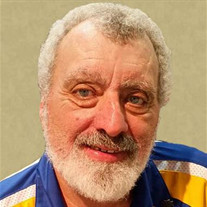 John Aloys Deters, age 62, of St. Clement passed away August 6, 2017 at his home in St. Clement. A Mass of Christian Burial will be held at 11am on Saturday, August 12, 2017 at the St. Clement Catholic Church with Fr. Jason Doke officiating. Burial will be in the St. Clement Cemetery. Visitation will be held from 3:00pm until 8:00pm on Friday, August 11, 2017 at the Bibb-Veach Funeral Home in Bowling Green. Rosary at 7pm. John was born February 8, 1955 in Louisiana, MO, the son of Aloys Anthony Deters and Betty Jon Morris Deters. He married Carol Ann Sunn of St. Louis at St. Clement Catholic Church on July 21, 1979. She survives. Other survivors include daughters, Nicole Deters of Columbia (Adam); Melinda “Lindy” Ankelman (Caleb) of St. Clement; Jonelle Deters of St. Clement; three grandchildren, Bristol, Keelan, and Leighton Ankelman; brothers, Steve Deters, Tom Deters (Jessica), sister Lois VanBoening (Mike), sister-in-law Mary Scherder (Gary). He also is survived by several nieces, nephews, and many “favorite” cousins. John lived all his life in St. Clement attending St. Clement Church. Growing up, John was involved in the Busy Bee Hustlers 4-H Club, Knights of Columbus Squires, Bowling Green FFA, worked on the family farm, participated in tractor pulls, and played on the Goose Hill baseball team. John attended University of Missouri, Columbia in 1973. He worked at Harbison-Walker Refractories for 10 years and worked as a farmhand for various farmers. In 1987, he and his wife Carol started Deters Sign Co. which she continues to operate. In May 2013, John and Carol purchased Johnny Diamond’s Sports Bar & Grill. He was a devoted member of the community and active in various clubs and organizations. John served in the Lion’s Club for 13 years. He served in roles of Tale Twister, Secretary, Vice-President and President. He also served roles of 2nd VDG, 1st VDG, and District Governor in District 26-M3. He was honored and awarded the Melvin Jones Award 2015 & 2017 and Lion of the Year 2015 & 2016. He was a member of The Elks- Lodge 791 for 15 years and held roles of Esquire and Chair of Lecturing Knight, and won the “Past Officer of the Year” award. John was a lifelong member of the Knights of Columbus Council 1928 and served as Recorder and 4th Degree member. He was member of the Bowling Green Chamber of Commerce for 30 years and served as President of the Chamber as well has holding other offices John also served on the Trimble House Board. John’s passion was playing cards. He was honored to become a member of the “Thursday Night Poker Group” of which his grandfather had been a member. He loved being on his farm. He also enjoyed taking family vacations and traveling. Most of all, he enjoyed spending time with family. His grandkids held a special place in his heart. Pallbearers will be Tom Deters, Lyle Morris, Martin Luebrecht, Mike VanBoening, Gary Scherder, Tex Williams. Honorary pallbearers will be Jerome Luebrecht, Kenny Scherder, Joe Foster, Craig Lehman, Bruce Dugan, Tharran Gaines, and Don Shelhammer. Memorials may be made to any of the following: John Deters Memorial Fund to help with medical expenses, St. Clement Catholic School, or Lions Club International Foundation (LCIF).

John Aloys Deters, age 62, of St. Clement passed away August 6, 2017 at his home in St. Clement. A Mass of Christian Burial will be held at 11am on Saturday, August 12, 2017 at the St. Clement Catholic Church with Fr. Jason Doke officiating.... View Obituary & Service Information

The family of John Deters created this Life Tributes page to make it easy to share your memories.

Send flowers to the Deters family.