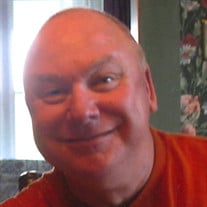 John Ray Shaw, 59, of Bowling Green passed away July 29, 2021 at Mercy Hospital in St. Louis after succumbing to injuries sustained from a motorcycle accident. Visitation for John will be Monday, August 2, 2021 from 9:00 a.m. to 11:00 a.m. at Bibb-Veach Funeral Homes and Crematory in Bowling Green. A graveside service will be held at Memorial Gardens Cemetery in Bowling Green immediately following visitation. John was born in Louisiana, Missouri on October 15, 1961 to Claude Vernon and Marjorie Marie Long Shaw. He was united in marriage to Karen Leverenz on May 30, 1981. To this union two children were born; Jill and Andrea. He married Karen Shaw on October 25, 2008. She preceded him in death on August 1, 2018. John grew up and lived in Bowling Green his entire life. He was a 1980 graduate of Bowling Green High School. He began working at Kroger in Bowling Green when he was 16 years old, and retired after 42 years. John also worked at UPS, where he had been employed for 25 years and was currently still employed. John was a member of the Bowling Green Gun Club and enjoyed hunting; especially duck hunting. He also enjoyed fishing and riding his motorcycle. Other favorite pastimes included cooking, gardening, and traveling; especially to Canada. John was known to have a passion for discussing politics. John is survived by his daughters, Jill Marks (Graham) of St. Charles, and Andrea Reynolds (Glenn) of Jefferson City; step-daughters, Jennifer Williams (Heath), Heather Schutz, and Allison Carchi; grandchildren: Naomi and Lydia Marks, Samuel, Jacob and Matthew Reynolds, AJ and Gavin Carchi, and Mallory and Audrey Williams; brother, Claude Shaw of Bowling Green; sisters, Elizabeth Bella of Myrtle Beach, South Carolina and Leahjo Long of Aubrey, Texas; close nephew, Luke Shaw (Keli Welch) of Wentzville; niece, Melanie Diebal; and great-nieces and nephews, Hailey and Parker Diebal. In addition to his wife, John was preceded in death by his parents. Pallbearers will be Paul Bogart, David Bogart, Les Hurd, Jared Atkison, Danny Burris, and Steve Cragen. Memorials may be made to Missouri Department of Conservation.

John Ray Shaw, 59, of Bowling Green passed away July 29, 2021 at Mercy Hospital in St. Louis after succumbing to injuries sustained from a motorcycle accident. Visitation for John will be Monday, August 2, 2021 from 9:00 a.m. to 11:00 a.m.... View Obituary & Service Information

The family of John Ray Shaw created this Life Tributes page to make it easy to share your memories.

Send flowers to the Shaw family.