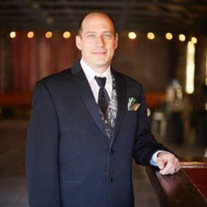 Not sure what to send?

John Edward Turnbough III, 45, of Fenton, passed away Monday, January 10, 2022. Funeral services for John will be held Tuesday, January 18, 2022 at 7:00 p.m. at Bibb-Veach Funeral Homes & Crematory in Bowling Green. Visitation will be from 4:00 p.m. to 7:00 p.m. on Tuesday at the funeral home. John was born September 13, 1976 in Louisiana, Missouri to John Edward Turnbough II and Alarice V. Hinds. He married the love of his life, Robin Elizabeth Kelly, on December 27, 2009 in St. Louis, Missouri. She survives. John grew up in the Bowling Green area and graduated Bowling Green High School in 1994. He relocated to St. Louis for work. In October, 2008, he met Robin. John was a Union electrician with Local 1, and he had received many awards over his 25 years of employment. John was known for being dedicated and a workaholic. He loved the outdoors, including hunting fishing, being on the water, and camping. John was a collector of guns. He also enjoyed country music, especially songs from the 80s. John was known as a prankster and loved to play jokes. He never met a stranger and was always willing to help others. John loved to barbeque and smoke meats for his family and friends to enjoy. He liked to surprise people with hot sauces, as he loved hot and spicy foods. John loved his friends and family, and never left without saying “I love you.” John is survived by his wife, Robin; children: Jenna Turpin (Matt) of Wright City, Allison Theiss of Fenton, and Maegan Turnbough of Fenton; grandson, Waylon Turpin; siblings: Kristina (Jason) Farrah of Thompson, Missouri, Vanessa (Robert) Kamrowski of New London, and Charles J. “CJ” (Angel) Turnbough of Mt. Laurel, New Jersey; mother-in-law, Debbie Lawrence; and many nieces, nephews, aunts, uncles, and extended family. JJohn was preceded in death by his parents; and grandparents, John and JoAnn Turnbough, and Lancie and Verline Hinds. Memorials may be made to the family.

The family of John Edward Turnbough III created this Life Tributes page to make it easy to share your memories.