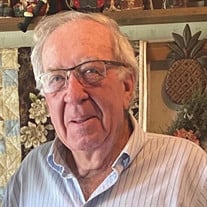 John Henry Waddell passed away June 30, 2021, at the age of 80. John was born December 21, 1940. He was the eldest son of Orpha Elizabeth (Brown) and James Henry Waddell. He had one brother, Billy Ed, who resides in Montgomery City. He was preceded in death by his parents, and his wife of 50 years, Mary. John attended school in Curryville and graduated from Bowling Green High School in 1958. After graduating, he attended the University of Missouri. In 1962, John graduated from University of Missouri with a degree in Agricultural Education. He started his teaching career at Clopton High School. After 10 years of teaching, John returned home to his first love, farming. In 1970, John married Mary Amelia Montoya, and to this union they had two sons, John David and James Lawrence. John was a lifelong Presbyterian. He served the Curryville Presbyterian Church as Deacon, Elder, Sunday School Superintendent, and on various committees. He also served on several Presbytery committees. He received the Evelyn Biddell award for lifetime achievement in the church. John loved farming, and he believed it to be his true calling in life. He loved all things agriculture, as he was a proud supporter of 4-H, FFA, and the Pike County Fair. He was a servant towards his community, as he served on the FHA committee, county extension, and a member of the Curryville Masonic Lodge. John loved John Deere Equipment, cattle, and Chester White hogs. He served as an officer on the State Chester white Association for several years. In his later years, he loved travelling and watching his grandkids show their pigs, especially their home raised Chester Whites, at the county, state, and national levels. In his spare time, he enjoyed following Cardinal Baseball and Mizzou Tiger Basketball. His fondest memories were travelling to Jupiter, Florida with his wife and friends each year for spring training. He is survived by his two sons, John David and his wife Angie of Curryville, and James Lawrence and his wife Sarah of Columbia. He leaves a legacy of 12 grandchildren: John Brett of Curryville, Ashlee Amelia (Zach Crader) of Bowling Green, Lillian Abigail of Curryville, Madisyn Elizabeth, Mathew Ryan, Mara Grayce, Bennet Michael, Brennah Marie, Grant Maclin, Makenna Faith, Elliott Micah, and Quinn Morgan all of Columbia. Serving as pallbearers are Ryan Luebrecht, Brett Waddell, Mathew Waddell, Zach Crader, Jeff Miller, and Brent Lewis. Honorary pallbearers are his grandchildren. Services will be held on July 3, 2021, at 2 p.m. at the Curryville Presbyterian Church with Mike Lewton officiating. Bibb-Veach Funeral Homes of Bowling Green is handling the arrangements. In Lieu of flowers, the family requests memorials be made to the Curryville Presbyterian Church.

John Henry Waddell passed away June 30, 2021, at the age of 80. John was born December 21, 1940. He was the eldest son of Orpha Elizabeth (Brown) and James Henry Waddell. He had one brother, Billy Ed, who resides in Montgomery City. He was... View Obituary & Service Information

The family of John Henry Waddell created this Life Tributes page to make it easy to share your memories.

Send flowers to the Waddell family.