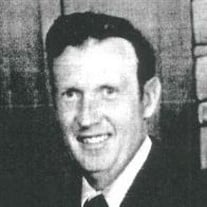 John Henry Warner, Bowling Green, passed away 2:00pm Sun. April 7,2019 at Country View Nursing Facility. Visitation will be at Bibb-Veach Funeral Home, Bowling Green, Mo. from 4:00-6:30 pm , Mon. June 17, 2019 with the Memorial Service @ 6:30pm. Pastors John Birkhead and Don Amelung will be officiating. The following obituary was written by John, himself, for his 1956 Bowling Green High School’s 50th class reunion & shows his sense of humor. “Like most of you in the class, I was born at an early age! I am a ’38 model. 10/10/38 was the day I discovered America, being born at home, near Ashley, Mo. My father, Ernest E. Warner was 60 yrs. old and my mother, Mattie (Knock) Warner was 40 and Dr. Matthews assisted. I had a half bro., Wm. Clements Warner who was 24 years older. I attended grade school in Ashley, being taught by Miss Lucy Ella Blackwell the first 6 years and Mrs. Henry (Ruth) Parrish for Grades 7 & 8. Then we had some “long-suffering teachers at BGHS, didn’t we? Anyone remember the glass gallon jug being hoisted up the flagpole? A couple of my female classmates putting a thumb tack in Tommy Williams’s chair? It reminded me of the “Great Indian Uprising”! After HS graduation, I served 6 months active duty (having joined the US Army Reserve, April 1956) Then 7 ½ yrs. in reserve. My parents and I moved from the farm to Bowling Green, March 1962. On Feb. 23, 1963, I started my 36yr. stint working at Hercules, Inc.in the Syn. Lub. Department -retiring June 1999. July 1974, while vacationing at Moody Bible Institute Conference @ Winona Lake, Ind., I met Eleanore Dodson, a RN from Indianapolis. We married Oct.5,1975 and have been privileged to travel quite a bit since then. In the Late 1970’s we assisted with 2 Med. Mission trips to Honduras with the Christian Med. Soc. Although I had to be convinced, I would be helpful, I found out dispensing “beecho” (worm) medicine made me a “favorite” to the local Hondurans. Some even would try to get double doses. We were able to go on 2 Bible Study cruises to Nassau with Dr. Charles Stanley, Dr. Dwight Pentecost and some well known Gospel musical groups, incl. Gold City Quartet. Soon after our marriage, some friends help us understand the US Supreme Court decision, Roe V Wade, by showing us the film “The Silent Scream”. We became quite involved in the prolife cause here in Mo. and over the next 20 years we went to Washington, DC for the March for Life each Jan. Several years we took 4-8 school youth on each trip also. In 1996 Eleanore was elected to be an alternate delegate for Alan Keyes for US president, so we were able to go to San Diego for the 1996 Republican National Convention. We have continued to support candidates we believe would best serve our country by volunteering to campaign, walking in parades, etc. We have had a “time share” with Word of Life Bible Conferences, so we were able to enjoy their resorts near Hudson, Fl., Or Schroon Lake, NY in the Adirondack Mts. since 1989. We have been privileged to travel to 42 states, Canada, and even across the Mexican border, besides 2 more Mo. Baptist Mission trips to Iasi, Romania & El Salvador, to help support the local churches, while Eleanore was on Mo. Baptist Convention board. Through our 43+ yrs. of marriage, we were members of Eolia, & Immanuel Baptist churches and attended 40 Mo. & Southern Baptist Conventions. This again gave us an opportunity to travel to many cities we wouldn’t have otherwise, incl. Las Vegas, NV; Houston; Dallas Tx.; New Orleans; Greensboro, NC; and Atlanta, Ga. Of all the live experiences, the only one that will count 1 second after this life is over is the decision to ask for forgiveness for sin and by faith to accept Christ’s death for us on the cross. It all boils down to, what did we do with the gift of salvation?” Per John’s request he was cremated, and buried in Mts. Runn Cemetery, Whitestown, Indiana. He had requested instead of flowers, that any expressions of sympathy be made to Far East Broadcasting Co.(FEBC is a 501c3 organization, est. in 1945, to promote the Gospel to Far Eastern countries.) PO Box 1, La Mirada, Ca. 90637-0001. John has contributed to this cause for over 65 years. They are presently building a new radio station in S. Korea to beam the Gospel into N. Korea. There will be information about the project @ Bibb-Veach Funeral Home, Bowling Green.

The family of John Henry Warner created this Life Tributes page to make it easy to share your memories.

Send flowers to the Warner family.