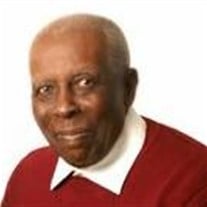 John Adam Watson Jr, 87, of Eolia, Missouri peacefully passed away Monday, September 17, 2018 at Maple Grove Lodge in Louisiana, MO. He was born on September 14, 1931 to John Adam and Pauline Watson in Eolia, MO. He was married on August 2, 1958, to Mary Lue Yates in Bowling Green, MO. Funeral services will be held 1:00 p.m., Thursday September 20, 2018 at the Bibb- Veach Funeral Home in Bowling Green. Burial will be in the Bowling Green City Cemetery. Visitation will be held 11:00 – 1:00 p.m. Thursday September 20, 2018 at the funeral home. He was a veteran of the United States Army and served during the Korean War. He received the National Defense Service Medal and the Good Conduct Medal. And was honorably discharged with the rank of Corporal. He worked as a farm hand for Obed Hall for many years. He then went to work as custodian at the Pike & Lincoln Vocational School and retired in 1993 after 20 years. He was saved and sanctified in 1970 and was a faithful pastor and member of the Eolia Free Holiness Church, and attended as long as his health allowed. He loved to be out in nature and the woods. Spending time at the Louisiana river front was one of his favorite past times. In his younger days he liked to cut wood and was well known for the straight even lines of stacked wood at his house along with a bountiful garden. He is survived by one son, Darryl Watson, Kansas City, KS, and one daughter, Cosandra Watson, Jefferson City, MO; two grandchildren, Leo McGruder Jr., Springfield, MO, and Leandra and husband Lukas Hulett, Lee’s Summit, MO; three great-granddaughters, Johonna Grace Skaggs, Leia Hulett and Lenix Hulett; four sisters, Frances and husband Peter Hawthorne, Des Moines, Iowa, Ora Bell Conway, Clarksville, MO, Lucille Warren, Eolia, and Donna Thorpe, Minneapolis, MN; and one brother, Donald and wife Kathleen Watson, Eolia, and sister-in-law Castella Crumes and numerous nieces, nephews, cousins and friends. He was preceded in death by his beloved wife of 58 years, Mary Lue, parents, John A and Pauline Watson, one brother, James Watson, and 2 sisters, Daisy Watson and Marguerite Watson.

John Adam Watson Jr, 87, of Eolia, Missouri peacefully passed away Monday, September 17, 2018 at Maple Grove Lodge in Louisiana, MO. He was born on September 14, 1931 to John Adam and Pauline Watson in Eolia, MO. He was married on August 2,... View Obituary & Service Information

The family of John Adam Watson Jr. created this Life Tributes page to make it easy to share your memories.