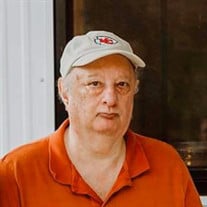 John Carl Weber, age 73, of Bowling Green, passed away Sunday, September 5, 2021, at the SSM St. Joseph Lake St. Louis. Funeral services will be held at 6:00 pm on Friday, September 10, 2021 at the Bibb-Veach Funeral Homes and Crematory in Bowling Green with Rev. Skip Merkel officiating and Military Honors under the direction of VFW Post #5553 and Missouri Military Honors. Visitation will be held on Friday from 4:00 pm until time of services. Cremation rites will follow services. John was born October 19, 1947 at the home of his parents Nicholas John and Martha Maxine Love Weber. One of two children, John attended Bowling Green schools and graduated with the class of 1965. Upon graduation he Married Delores Jane Ruschill in Hannibal on September 1, 1967. She survives. In 1968 he enlisted in the United States Navy where he served and was later honorable discharged. Upon returning home, John began working and raising his family. John worked for Firestone in Bowling Green, the brick plant in Vandalia, and Master Air in Hannibal before spending the remainder on his working years working for MASH in Bowling Green. While working for MASH in Bowling Green, John served many roles in his 22 years, primarily as the HVAC specialist. He retired in 2008. In John’s spare time, he enjoyed hunting and fishing in his younger days. He and Delores would often spend hours fishing in the Salt River. John was always finding things to do outdoors and enjoyed finding things to work on. On the occasions John would slow down long enough to come inside, he would enjoy watching western movies with John Wayne or Clint Eastwood. He was also known to be a big sports fan, especially when it came to the St. Louis Cardinals and the Kansas City Chiefs. More than anything, John loved his grandchildren. This love was easily seen in the ways that they could talk grandpa into doing just about anything they asked, like painting the front door pink. Left behind to carry on John’s memory are his wife Delores Weber of Bowling Green; son Eric Weber (Melissa) of Bowling Green; grandchildren Brendan Weber, Mara Weber, and Melynn Weber; two nieces. John was preceded in death by his parents and one sister Carolyn Van Arsdel. Memorials may be made to the Wounded Warriors Project.

The family of John Carl Weber created this Life Tributes page to make it easy to share your memories.

Send flowers to the Weber family.