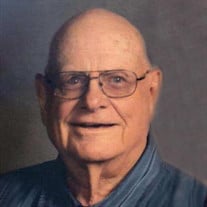 Joseph Gilbert Schuckenbrock, 92, of Bowling Green, passed away peacefully at his home on Friday, September 3, 2021. A Mass of Christian Burial will be held Tuesday, September 14, 2021 at 11:00 a.m. at St. Clement Catholic Church. Burial will be in St. Clement Cemetery. Visitation will be from 9:00 a.m. to 11:00 a.m. on Tuesday at St. Clement Catholic Church. Gilbert was born August 1, 1929 in Bowling Green, the son of Charles and Julia Ann Grawe Schuckenbrock. On August 16, 1952 he was united in marriage to Marilyn Korte. They recently celebrated their 69th anniversary, and were honored at the St. Clement 150th Anniversary Dinner as the longest married couple in the parish. Other survivors include children: Sue Patterson (Chuck) of Mexico, Bill Schuckenbrock (Shirley) of Bowling Green, Phyllis Edwards (Jimmy) of Middletown, Lois Hortsman (Donnie) of Mokane, Phillip Schuckenbrock (Lana) of Wellsville, Bob Schuckenbrock (Patti) of Bowling Green, Ellen Sutton (Joe) of New Hartford, Sharon Bruns (Tim) of Middletown, and Julie Motley (Mark) of Troy; two sisters: Leona Sobczak of Clinton, Michigan, and Jane Fuch of St. Louis; along with 25 grandchildren and 34 great-grandchildren; sister-in-law, Alice Schuckenbrock; and many nieces and nephews. He was preceded in death by his parents; brothers, Richard Schuckenbrock, Charles Schuckenbrock, and Frank Schuckenbrock; and sister, Sr. M. Juliette. Gilbert was very active in the community. He was a member of St. Clement Catholic Church, and was known to lead the Rosary before Mass on Saturday evenings. He also sang with the choir. Gilbert was a member of the St. Clement Knights of Columbus and the St. Clement School Board, a director of Production Credit Associates Federal Land Bank and Pike County Mutual Fire Insurance Company, and President of Ashley Community Center Board. He was a vital part of the Ashley Fish Fries every Lent. He played baseball for area teams for many years, always playing catcher. Gilbert loved to go coyote and coon hunting with his friends, and loved to fish. He played the mandolin, and enjoyed dancing. He was known for his stories and jokes. Gilbert was well-known in the community, and a man of his word. He will be sadly missed by all who knew him. Memorials may be made to St. Clement School or Pike County Home Health and Hospice.

Joseph Gilbert Schuckenbrock, 92, of Bowling Green, passed away peacefully at his home on Friday, September 3, 2021. A Mass of Christian Burial will be held Tuesday, September 14, 2021 at 11:00 a.m. at St. Clement Catholic Church. Burial will... View Obituary & Service Information

The family of Joseph Gilbert Schuckenbrock created this Life Tributes page to make it easy to share your memories.

Send flowers to the Schuckenbrock family.