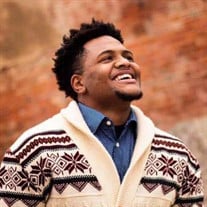 Kaleo Ka&#8217;Zhan Dade, 18, of Bowling Green, passed away on March 22, 2019, after suffering injuries in a motor vehicle collision on a two-lane highway near Frankford. Funeral services will be held at 5 p.m. on Friday, March 29, 2019, at... View Obituary & Service Information

The family of Kaleo Ka'Zhan Dade created this Life Tributes page to make it easy to share your memories.

Kaleo Ka’Zhan Dade, 18, of Bowling Green, passed away on March...

Send flowers to the Dade family.