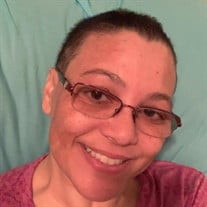 Karma Lynn Niemeyer, age 41, of Bowling Green, Missouri, formerly of Jacksonville, Illinois, passed away peacefully from cancer on June 10, 2021 in her home while holding hands with her mother and daughter. Karma was born on October 29, 1979 in Jacksonville, Illinois to Judy Niemeyer and Gordon Shepherd. She grew up in Jacksonville with her sister, Krystal. Karma was active in USA Track and Field and AAU, and traveled extensively around the United States to compete. Karma loved to swim and spent several years working as a lifeguard for the YMCA. During high school, Karma played volleyball, where she challenged opponents to return a wicked jump serve. She was also a member of the track team, specializing in discus. Less active high school endeavors included FBLA, the school newspaper, and band, where she played the flute, the piccolo, and was a flag bearer. Upon graduation, Karma received an appointment to the United States Naval Academy in Annapolis, Maryland, where she played volleyball, continued her track and field career, sang in the United States Naval Academy Gospel Choir, and taught numerous cadets how to swim. She established many lifelong friendships at the academy and became an honorary member of her host family. When she left the academy, Karma attended the University of Maryland College Park in Columbia, Maryland for a year before returning home and enrolling in the Capital Area School of Nursing in Springfield, Illinois, where she graduated as valedictorian. She worked several years at St. John’s Hospital; then The Wells Center; several nursing homes; and a doctor’s office. Her most recent job was at Northeast Correctional Center in Bowling Green, Missouri, where she served as the infection control nurse. Karma was preceded in death by her father; an infant son, Korey Christopher; her brother, Corey; her sister, Jodie; five uncles; both sets of grandparents; and numerous cousins. Survivors include her mother, Judy Niemeyer; daughter, Kaya; brothers, Alex and Paul; sisters: Krystal, Brittany, Roma, Debra, and Deneen; and several aunts, uncles, and cousins. She left many friends behind as well. Karma requested a visitation with no funeral; cremation; and at a later date, A Celebration of Life. Visitation will be held on Wednesday, June 16, 2021 from 4:00 p.m. to 8:00 p.m. at Bibb-Veach Funeral Homes and Crematory in Bowling Green.

Karma Lynn Niemeyer, age 41, of Bowling Green, Missouri, formerly of Jacksonville, Illinois, passed away peacefully from cancer on June 10, 2021 in her home while holding hands with her mother and daughter. Karma was born on October 29, 1979... View Obituary & Service Information

The family of Karma Lynn Niemeyer created this Life Tributes page to make it easy to share your memories.

Send flowers to the Niemeyer family.