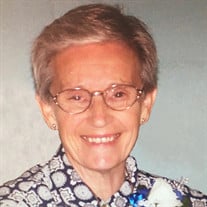 Kathleen Watson, age 78, of Curryville passed away October 4, 2016 at her home. Funeral services will be 10:00 a.m. Friday, October 7, 2016 at the Bibb-Veach Funeral Home in Bowling Green with Rev. Bob Hoehns officiating. Burial will be in... View Obituary & Service Information

The family of Kathleen Watson created this Life Tributes page to make it easy to share your memories.