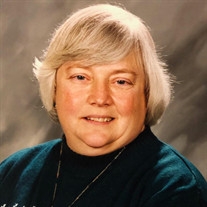 Katinell Finke Traynor, age 68, of Louisiana, formerly of Bowling Green, passed away Friday, August 28, 2020 at Mercy Hospital in St. Louis. Funeral services will be held 10:00 am Tuesday, September 1, 2020 at the Second Baptist Church in Bowling Green with Pastor Mark West and Rev. Jerry Gamm officiating. Burial will be in the Greenlawn Cemetery in Bowling Green. Visitation will be held from 4:00 pm until 8:00 pm Monday, August 31, 2020 a Bibb-Veach Funeral Home in Bowling Green. Katinell was born November 30, 1951 in Hannibal, the daughter of Frederick Louis and Mildred Elaine Cobb Finke. She married Ronald Haverich July 11, 1970 and to this union three children were born. Later, she married Marion Traynor April 10, 2004 and received two step-children. He survives. Other survivors include son Craig W. Haverich (Micah) of Owatonna, MN; daughters Elaine K Gray (Chris) of Louisiana and Melinda R Patrick (John) of Silex; step-children Joseph Traynor of Louisiana and Melinda Butler of Clarksville; six grandchildren Samantha Lagemann, Austin Lagemann, Brendan Gray, Jocelyn Gray, Memphis Haverich, and Auron Haverich; many nieces, nephews, and relatives. She was preceded in death by her parents and brother Charles Finke. Katinell was born in Hannibal, MO, raised in Bowling Green and graduated from Bowling Green High School in 1969. Her family moved to Eolia in 1978, where she lived most of her adult life until she moved to Louisiana in 2001. She was a member of the Second Baptist Church in Bowling Green, where she volunteered in many capacities and has been the church librarian since 1978. Her dedication and desire to serve others in volunteer work was visible in the many clubs she belonged to, including GFWC Aeolian Club in Eolia since 1982 where she served as district 4 president as well as state treasure from 2000 until 2002. Other volunteer work included GFWC Chautauqua Club in Clarksville, Eolia ballpark board for 5 years, Eolia Volunteer Fire Department secretary\treasure, as well as the American Legion Auxiliary where she has served since 2001. Katinell was a dedicated hard-working individual. From 1973 until 1978 she worked for the Pike County Memorial Hospital in the respiratory department. From 1979 until 2003 she served as a secretary for Louisiana Manufacturing Company\Hubbell Electrical and from 2003 until she retired in 2016, she served as an OSA at the Northeast Missouri Correctional Facility. Katinell loved spending time with her family. She enjoyed her girls weekends with her daughters and getting to love on her grandchildren every chance she could. She and Marion enjoyed fishing and even had a points system in place to see at the end of the day who won for the most fish. Of course, Katinell created the point system and might have skewed it slightly in her favor at a 10pt to 1pt ration with the loser having to buy the winner a gift that she got to pick out either way. In her younger years she enjoyed playing pinochles. Her love for Snoopy, Charlie Brown and the Peanuts gang was a perfect fit with her love for Christmas, as A Charlie Brown Christmas was her favorite Christmas movie. She enjoyed going on car rides with her daughters looking at Christmas lights and decorating her own home for the season. She could always be talked into going on a trip to Dairy Queen for some ice cream or stopping by Bankheads Chocolates for a box of turtles. Katinell was loved by many and will be missed by all who knew her. Serving as pallbearers will be Austin Lagemann, Brendan Gray, David Finke, Danny Finke, Jacob Bowen, and Charles Bowen. Honorary pallbearers will be Terry Traynor, Clint Bowen, Thomas Finke, and William Finke. Memorials may be made to American Cancer Society or Donors’ Choice.

The family of Katinell Finke Traynor created this Life Tributes page to make it easy to share your memories.

Send flowers to the Traynor family.