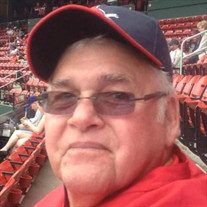 Kenneth Howard Everhart, 72, of Bowling Green, Mo passed away on May 27, 2022, after a lengthy battle with heart disease. Tuesday, May 31, 2022, visitations will be held at 12 p.m. with services following at 2:00 p.m. at Bibb-Veach Funeral Home. On November 18, 1949, Kenneth Howard Everhart was born to his parents Charles & Lily Mae (Curry) Everhart of Van Buren, MO, where he grew up and attended school. Upon his graduation from Van Buren High School, he went to service in the United States Army, where he was a Crew Chief of Helicopter Operations. In 1973, while working for the Mo Department of Transportation-Highway Division, painting and sandblasting bridges, he met the love of his life Sandra Louise Perkins. They were united in marriage on Friday, March 15, 1974. They made their home in Eldon, MO until he took a job with Tex-Gas Co. in Vandalia, Mo. They moved back to the Bowling Green area and made their home. He worked for Charleswood Furniture Company in Wright City. After leaving Charleswood he took a job as a Manager of Mo. Vocational Enterprises (MVE) for the Department of Corrections. After 15 years of service, he retired from the State of Mo. Kenny and Sandra were blessed with three children, Shawn Harvey Everhart, Margie Mae Everhart Harrell, and Sonya “Cricket” Louise Everhart Bates. Kenny had a love for family, St. Louis Cardinals baseball, hunting, and working on old vehicles, which he passed down to his children and grandchildren through the years. He was a man who worked hard to provide for his family and extended family. Kenny was proceeded in death by both parents; older brother, Charles Wayne Everhart, younger sister, Rhonda Kay Burton, & daughter, Sonya “Cricket” Louise Everhart Bates. Kenny is survived by his wife of 48 years, Sandra Louise Everhart; son,Shawn Harvey Everhart; Daughter, Margie Mae Harrell & Dwayne Ehret of Bowling Green; five grandchildren: Ethan Howard Everhart, Kenzee Harrell & fiancé Mathew Shipman, Landon Harrell, Quentin Harrell, & Jackson Harrell; one brother, Reggie & wife Christine Everhart of Blue Springs, MO; and many extended sons and daughters and grandchildren who called him Pop, Dad, PaPa, and Grandpa; along with many nieces and nephews. Memorials can be made to the American Heart Association.

Kenneth Howard Everhart, 72, of Bowling Green, Mo passed away on May 27, 2022, after a lengthy battle with heart disease. Tuesday, May 31, 2022, visitations will be held at 12 p.m. with services following at 2:00 p.m. at Bibb-Veach Funeral... View Obituary & Service Information

The family of Kenneth Howard Everhart created this Life Tributes page to make it easy to share your memories.

Send flowers to the Everhart family.