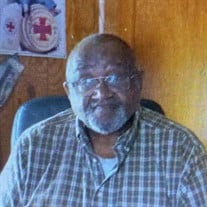 Larry Eugene “Duke” Hendrix, 73, of Bowling Green, passed away February 8, 2022 at the University of Missouri Hospital in Columbia. Funeral services for Larry will be Saturday, February 19, 2022 at 11:00 a.m. at Bibb-Veach Funeral Homes & Crematory in Bowling Green with Rev. Charlie Wright officiating. Burial will be in Greenridge Memorial Park Cemetery in Frankford, Missouri. Visitation will be Friday, February 18, 2022 from 4:00 p.m. to 8:00 p.m. at the funeral home. Larry was born December 2, 1948 in Frankford, Missouri to Frank and Juanita Campbell Hendricks. He was united in marriage to Clara Lybarger on October 2, 2014. She survives. Also surviving is his son, Larry M. Hendrix of Bowling Green; step-sons, Mark Elder of Bowling Green, Timmy Elder of Atlanta, Georgia, Jerry Lybarger (Stacy) of Blue Springs, Missouri, Lashaun Davis (Grace) of Rush Hill, and Brandon Davis of Mexico; grandchildren, Devany Hendrix and Kamaea Hendrix; many step-grandchildren and great-grandchildren; along with many cousins and friends. He was preceded in death by his parents; and step-daughter, Gail Lybarger. Larry grew up in Frankford and was a 1967 graduate of Bowling Green High School. He later relocated to Bowling Green, where he remained until the time of his passing. Larry was an active member of the White Rose Missionary Baptist Church, where he taught Sunday School, served as a Deacon, sang in the choir, and assisted with church barbeques. He also participated in Frankford Choir Day. After high school, Larry worked for the Missouri State Highway Department for 8 years. He later went to work at Hercules as a water filtration specialist, where he retired in 2012. Larry enjoyed fishing, camping in his camper at Mark Twain Lake, and hunting deer, rabbits, squirrels, and turkey. He loved seafood, and enjoyed going to “Best Buffet” in Quincy for frog legs. Larry was a fan of the Kansas City Chiefs and the St. Louis Cardinals. He also enjoyed watching NCIS. Pallbearers will be John Schindler, Donnie Hendricks, Harold Hendricks, Garrett Schindler, Keenen Willis, and Eddie Linear. Honorary pallbearers will be Bill Unsell, Paul Redmond, Dale Stewart, and Mike Wells. Memorials may be made to the White Rose Missionary Baptist Church.

The family of Larry Eugene "Duke" Hendrix created this Life Tributes page to make it easy to share your memories.

Send flowers to the Hendrix family.