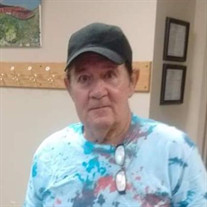 Larry D. Shepard, age 74 of Labelle, MO, passed away Wednesday, September 18, 2019 at the Boone Hospital Center in Columbia, MO. Funeral services will be held at 2:00 pm on Monday, September 23, 2019 at the Bibb-Veach Funeral Home with Pastor Mike Myers officiating. Burial will be in the Fairview Cemetery in Frankford, MO. Visitation will be held from 4:00pm until 6:00pm on Sunday at the funeral home. Larry was born December 15, 1944 in St. Louis, the son of Albert Shepard and Hellen Lawson. He grew up in East Prairie, MO until he moved to St. Louis, where he met and married Virginia Louise Aldridge on December 4, 1965. She preceded him in death November 1, 1996. Larry is survived by his son, Darrell R. Shepard (Jessica) of Labelle, MO; grandson Ryan Shepard; brother James Basinger (Norma); sisters Shirley Dally (Scott), Mary Cron, Betty Carter, Sandra Evans and Janet Basinger; many nieces and nephews and special friends Larry Parris Sr., Jimmy and Carrie Compton and Jeannette Compton. He was preceded in death by his parents and wife. Larry worked at Metzger Tool and Dye in Overland, MO for 30 years. Upon his retirement he lived to hunt deer, turkey, and squirrel and fish. Larry was a WWE wrestling fanatic. He also enjoyed grilling and fish fry’s, and going to the boat to play poker or seven card stud. Serving as pallbearers will be Jimmy Compton, Larry Parris Jr., Sean Parris and Charles Schnake. Memorials may be made to the Dialysis Clinic Inc. 600 Rosewood Dr. Kirksville, MO or the Kidney Foundation.

Larry D. Shepard, age 74 of Labelle, MO, passed away Wednesday, September 18, 2019 at the Boone Hospital Center in Columbia, MO. Funeral services will be held at 2:00 pm on Monday, September 23, 2019 at the Bibb-Veach Funeral Home with Pastor... View Obituary & Service Information

The family of Larry D. Shepard created this Life Tributes page to make it easy to share your memories.

Send flowers to the Shepard family.