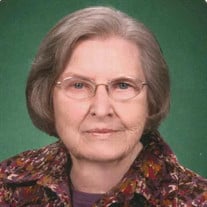 Lena Burk (Cunningham) Jeffery, age 89 of Bowling Green, MO formerly of West Plains, MO, passed away Thursday May 31, 2018 at the Country View Nursing Facility in Bowling Green, MO. Funeral services will be held at 1:00pm on Wednesday, June 6, 2018 at the Salem United Methodist Church in Salem, AR with Rev. Velda Bell officiating. Burial will be held in the Salem Cemetery. Visitation will be held from 11:00am until time of services on Wednesday at the church. Lena was born May 14, 1929 in rural Camp, AR, the daughter of Rufus and Berniece Burk Cunningham. She married Ralph E. Jeffery January 5, 1954. He preceded her in death. Survivors include her sisters Betty Humphries (George) of Salem, AR, Adine Stevens (Bob) of Colbert, OK and Aline Louma of Glendora, CA; sisters-in-law Dorothy Brown and Nadine Langley (Doyle); brother-in-law Lyle Jeffery (Angelece); several nieces and nephews. She was preceded in death by her parents, husband and brother Rufus, Jr. Lena graduated from Salem, AR High School and attended Draughon’s Business School in Little Rock, AR. She worked in her hometown of Salem, AR until she moved to St. Louis and married her husband. She worked for years for Phillips Petroleum as a bookkeeper at their St. Louis headquarters. She was a long time member of the Jane Phillips Sorority, a part of the Phillips Company which served charitable causes. After her retirement, she and Ralph relocated to West Plains, MO near their hometowns. Lena was a lifelong active member of the First United Methodist Church in West Plains. She moved to Bowling Green, MO in 2015 and was a resident of Lynn’s Heritage House in Louisiana, MO for two years before moving to Country View Nursing Facility in Bowling Green, MO for the past few months. Memorials may be made to the Donors’ Choice. Serving as pallbearers will be David Humphries, James Heflin, Lyle Jeffery, James Jeffery, Josh Lafferty and Kim Brown Pistner. Honorary pallbearers will be George Humphries, Bob Stevens and Doyle Langley. Funeral services are under the direction of Bibb-Veach Funeral Homes, LLC in Bowling Green, MO.

The family of Lena Burk Jeffery created this Life Tributes page to make it easy to share your memories.

Send flowers to the Jeffery family.