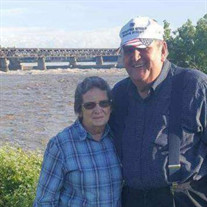 Linda Diane Meier, 71, of Eolia, passed away February 19, 2022 at her home. Funeral services for Linda will be held Tuesday, February 22, 2022 at 10:00 a.m. at Bibb-Veach Funeral Homes & Crematory with Bro. Sammy Lorton officiating. Burial will be in Fairview Cemetery in Louisiana, Missouri. Visitation will be from 9:00 a.m. to 10:00 a.m. on Tuesday, February 22nd at the funeral home. Linda was born December 5, 1950 in Louisiana, Missouri to Norman Cash and Mary Hopke Hall. She was united in marriage to Ronald Lee Meier on July 20, 1968 at the Baptist Church in Louisiana. He survives. Linda grew up in the Louisiana area and attended Louisiana High School. After graduation, she and Ron married. They spent time raising their family in Louisiana, Missouri and Ohio, before eventually settling in Eolia. She was a member of the Bible Holiness Church of Bowling Green and Eolia. Linda had spent over 20 years employed at Bridal Originals and Bowood Farms, retiring five years ago. Linda was very passionate and deeply engrossed in her flowers and gardening. She loved to cook and sew. She also enjoyed traveling with her sister as she served others in Louisville, Kentucky. Spending time with her husband and grandchildren was a favorite pastime. She enjoyed going out to eat at Cracker Barrel and visiting the Amish bakeries. Along with her husband, Linda is survived by children, Sean Meier (Pam) of Bowling Green, Talia Emily of Lake St. Louis, and Isaac Meier (Missy) of Eolia; grandchildren: Ryan, Hannah, Jade, Chloe, Kadyn, Timothy, Josh, and Ethan; great-granddaughter, Heidi; sister, Norma Robbins of Sun River, Oregon; and brother, Paul Hall of Millcreek, Oklahoma. Linda was preceded in death by her parents, and her brother-in-law, Tommy Robbins. Pallbearers will be Sean Meier, Isaac Meier, Ryan Tucker, Kadyn Emily, Timothy Emily, and Greg Oliver. Honorary pallbearers will be Josh Meier, Ethan Meier, and Buzz Mendonsa. Memorials may be made to the donor’s choice.

The family of Linda Diane Meier created this Life Tributes page to make it easy to share your memories.

Send flowers to the Meier family.