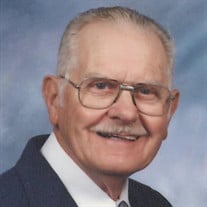 Lloyd “Ed” Edward Couts, age 93, of Whiteside, MO, entered into rest Sunday, January 17, 2021 at Mercy Hospital-Lincoln. Graveside services will be held Friday, January 29, 2021 at 11:00 a.m. at Millcreek Cemetery in Silex, with Pastor David Land officiating. Military Honors being conducted my Missouri Military Honors and VFW Post #5553. Born April 2, 1927 in Kansas City, MO to Samuel and Freida Woods Couts, Ed was the oldest of three children. He grew up and lived South of Kansas City most of his life, living in Raymore and Drexel, MO, until recently moving to Whiteside, MO in August of 2020 to be closer to his son and family. On November 10, 1950 he married Bulah Mae Johnson, and this past November the celebrated their 70th Anniversary. Survivors include Ed’s wife Bulah of Whiteside, MO; daughter Janet Spor (Lawrence) of Harrisonville, MO; son David Couts (Karen) of Whiteside, MO; grandchildren Lisa Street (Danny), Sarah Dalrymple (Brian Leitman), Samantha Utterback (Cale), and Breanna Knapp (Thomas); 8 great grandchildren; sister Lois Stump of Jacksonville, FL. Ed was preceded in death by his parents and brother Earl Couts. Living most of his life of the West side of the state of Missouri, Ed spent his working years as a machinist, under contracts with the Department of Energy. Ed proudly served in the United States Army during the tail end of WWII and spent time in Germany. Being a strong man of faith, Ed was a member of Drexel Baptist Church where he filled many roles with the church and currently attended Eolia Baptist Church. At a young age, Ed had a passion for music. In High School he played drums in a band with his best friend. He learned to play piano by ear and enjoyed the harmonica. Ed loved old church hymns and Christian music. This past Christmas, at the age of 93, Ed delivered a musical special for his church at Eolia Baptist Church. Ed loved tinkering and working on old cars, he was currently working on a red and white 1952 Nash Metropolitan. He had a sweet tooth and enjoyed drinking Dr. Pepper. Although he had moved to Whiteside and was in the heart of Cardinal Nation, Ed’s heart bled Kansas City Royals blue, making sure that upon his move to the East side of the state that he could still watch in Royals play ball. Above all, his relationship with the Lord, his church and his family were the most important things in his life. He will be greatly missed by all who knew him. Serving as pallbearers will be Cale Utterback, Danny Street, Brian Leitman, Samuel Dalrymple, Mason Street, Logan Dalrymple, Evan Utterback, and Thomas Knapp. Memorials may be made to the Eolia Baptist Church.

The family of Lloyd "Ed" Edward Couts created this Life Tributes page to make it easy to share your memories.

Send flowers to the Couts family.