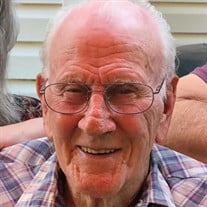 Lloyd “Dale” Kientzy, 88, passed away on Monday afternoon , January 31, 2022 from complications of covid-19. Dale was born on November 16, 1933 at home in Burr Oak, MO in the Elsberry river bottoms to Martin and Florence (Talbot) Kientzy. The youngest of 7, Dale spent his youth quite independently, developing his great love for the outdoors by wandering along the rivers and in the woods of Lincoln County. He continued this activity throughout his life and could tell you a fishing story about any bank along the Cuivre River; prime turkey, squirrel and deer hunting spots; and, if you were fortunate, he might even share his secret location for finding morel mushrooms. Dale was a loyal and dedicated son and brother taking care of his parents and his siblings, Elmer and Edna, in their aging years. The family moved to Silex when Dale was young and he spent his entire life in this small town. He graduated from Silex High School in 1951 where he was a skilled athlete in basketball and baseball. Dale continued playing Hard Road baseball in his early adult years and watched many a Cardinals game. Dale was a veteran having served in the Army from 1954-1956 where his job as a mechanic perfectly fit his aptitudes and abilities. In June of 1959, Dale married Mary Lee Momphard. They both considered themselves “lucky” to have found such a good partner. Mary Lee even commented on her “ability to catch a Kientzy” in her Senior yearbook. Although known as Dale to everyone else, Mary Lee often called him Lloyd. Dale, along with his brother Sef, built their house in Silex; Dale was exceptionally proud of this and one would be hard pressed to find a better constructed home. They spent 42 years together before Mary Lee passed of cancer in 2001. Mary Lee often joined Dale in deer hunting and together, they hosted large family fish frys remembered fondly by extended family. Mary Lee woke up very early every morning to pack his lunch. They took annual vacations where Dale drove through the night and always attempted to find a hotel with a pool. Before her death, Dale and Mary Lee took an epic trip to Alaska which remained one of Dale’s most treasured memories. Dale’s career as an Ironworker (Union 396) gave him a deep sense of pride and accomplishment. His methodical approach to problem solving, exceptional math skills and eye for perfection served him well in this profession. Dale was given Foreman responsibilities early in his career and he met lifelong “brothers”. Even in his last few hours, as he was fading, Dale thought he was “tightening bolts” and had to “get them just right”. Dale and Mary Lee had three daughters who survive. Debbie, Shelley and Sandi remember their dad as a dedicated provider, softball instructor, reluctant horse owner and Santa elf (toy assembler). Although he often worked in the St. Louis area, he never missed a softball game. They know him as a man of high integrity who always followed through on a promise and a clever inventor who could create something useful out of thin air. He instilled in them a loyalty to family and although Dale was a bit grouchy in his older years, they never doubted his love for them. Dale also had a strong bond with his son-in-law Jim who he spent many hours with over the past several years. Jim was not only an on-call IT tech and general Mr. Fix It, he was also a loving, gentle and loyal friend to Dale. Dale was most in his element when outdoors either floating down the Cuivre, setting up a deer stand, waiting in the early morning woods for a turkey to respond to his call or training and hunting with his beloved dog, Blazer. Dale is survived by his daughters Debbie (Ken) Reed, Shelley (Jim) Wood and Sandi (Joe) Horvat. He is also survived by his brother-in-law, Gary Momphard and his ten grandchildren: Brian Johnson, Will Reed, Lydia Reed, Zachary Wood, Christian Wood, Bailey Wood, Taylor Griffith, Drew Horvat, Grace Horvat and Bella Horvat. Visitation will be at Bibb-Veach Funeral Home in Silex, MO from 8:00-10:00 am on Saturday, February 5 with private family graveside service immediately following. Memorials are suggested to the American Cancer Society in honor of Mary Lee.

The family of Lloyd "Dale" Kientzy created this Life Tributes page to make it easy to share your memories.

Send flowers to the Kientzy family.