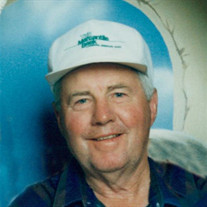 Louis J. Andrews, 92, of Louisiana, passed away Thursday, October 31, 2019, at Maple Grove Lodge in Louisiana, Missouri. Funeral services will be held Monday, November 4, 2019, at Bibb-Veach Funeral Home in Bowling Green at 11:00 a.m. with Bro. David Land officiating. Burial will be in Green Lawn Cemetery. Visitation will be from 9:30 to 11:00 a.m. at the funeral home. Mr. Andrews was born May 8, 1927 in Dubach, Louisiana, to Louis and Mary Belle Garlington Andrews. He married Bessie Littrell on September 30, 1950 in Pocahontas, Arkansas. All preceded him in death. Also preceding him in death was a brother, David Morris Andrews. Mr. Andrews served in the United States Navy where he served on the USS O’Brien during WWII. He was also involved in the testing of atomic bombs. He had been a member of the Masonic Lodge for over 60 years and the Local 562 for over 70 years. Louis enjoyed raising exotic birds, fishing, grilling and spending time with family. He also liked tinkering and could do just about anything. Louis was known as “The Birdman of NN.” He also enjoyed reading western books and watching western TV shows. Surviving Mr. Andrews are daughters Vallie Tepen of Bowling Green and Joyce Bokor of New Bern, North Carolina; grandchildren Tamara Bokor of Gardner, Kansas; Angela (Jerry) Shelton of Louisiana; Steve Louis (Julien) Bokor of Havelock, North Carolina; David Louis Tepen of Bowling Green; and Tari Tepen of St. Peters, Missouri. Also great-grandchildren Tamara Crawford of Verdin, Illinois; Stephanie Crawford of Columbia, Missouri; Andrew Bokor of Wilmington, North Carolina; and Kaden Tepen-Crane of Philadelphia, Missouri, along with many nieces and nephews. Pallbearers will be Steve Bokor, David Tepen, David Andrews Jr., Phillip Andrews, Gary Littrell and Jerry Shelton. Honorary pallbearers will be R. J. Allensworth, Dalton Walker and Larry Chamberlain. Memorials may be made to the donor’s choice.

The family of Louis James Andrews created this Life Tributes page to make it easy to share your memories.

Send flowers to the Andrews family.