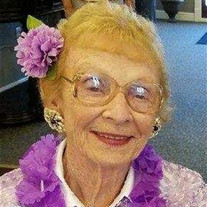 Margaret Kathleen Roberts, age 92, of Troy, MO passed away Friday, May 11, 2018 at the Sugar Creek Assisted Living Center in Troy. A Mass of Christian Burial will be held at 10:00am on Tuesday at the St. Alphonsus Catholic Church in Millwood with Fr. Charles Tichacek and Fr. Tom Wissler officiating. Burial will be held in the St. Alphonsus Cemetery. Visitation will be held from 4:00pm until 7:00pm on Monday at the Bibb-Veach Funeral Home in Silex. Kathleen was born September 16, 1925, in Silex, MO, the daughter of William Everett and LuLu (Mudd) Shocklee. Kathleen attended St. Alphonsus Catholic School for her first two years of high school, and the last two years at Silex High School where she graduated in 1943. Upon graduation she worked at First National Bank in St. Louis for almost a year. On April 13, 1944, at St. Alphonsus Church in Millwood, MO, she married the love of her life, George Anthony Roberts Sr. while he was on leave from the Navy. He preceded her in death on April 4, 2015. Kathleen helped her husband in running their Standard Oil (Amoco) truck business for 26 years while raising five children. She was a seamstress for her family and the Silex community, starting with altering men’s suits for the Enterprise store in Silex. She was also an avid quilter and enjoyed dancing, golfing and traveling with her husband. Kathleen is survived by four daughters; Barbara (Clayton) Duff of Hawk Point; Marilyn Wheaton (Paul Duffy) of Detroit, MI; Gloria (Buck) Moody of California; Mary K. Roberts of Trenton, MI; two grandsons, Eric (Tammy) and Greg (Elaine) Duff; two great grandchildren, Branden and Cierra Duff. She was preceded in death by her son George (Robbie) Roberts Jr; two brothers Marvin and Howard (Mike) Shocklee; and three sisters, Darline Mudd, Dorothy Roberts, and Delores (Dee) Carboni. Serving as pallbearers will be Eric Duff, Tammy Duff, Greg Duff, Branden Duff, Cierra Duff, Kayla Hays, Bob Shocklee and Dean Shocklee. Memorials may be made to the St. Alphonsus Cemetery or Central Missouri Honor Flight.

Margaret Kathleen Roberts, age 92, of Troy, MO passed away Friday, May 11, 2018 at the Sugar Creek Assisted Living Center in Troy. A Mass of Christian Burial will be held at 10:00am on Tuesday at the St. Alphonsus Catholic Church in Millwood... View Obituary & Service Information

The family of Margaret Kathleen Roberts created this Life Tributes page to make it easy to share your memories.